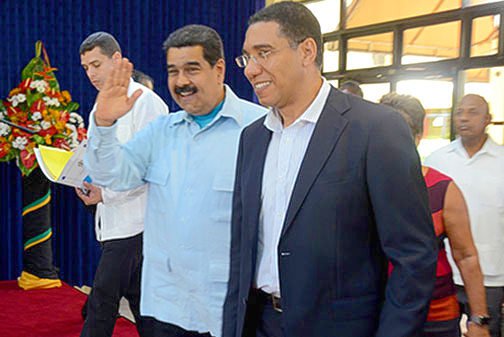 KINGSTON, Jamaica–Despite facing economic challenges, the Venezuelan Government has reiterated its commitment to maintaining its arrangements with Jamaica under the PetroCaribe Agreement.

President Nicolás Maduro made the promise during a working visit to Jamaica Sunday, as he sought to allay uncertainty about his country’s commitment to the agreement, noting that both governments had discussed the need to strengthen the scheme.

He said that was important, as the PetroCaribe Agreement has been successful in bolstering the economic and energy exchanges of the member countries.

“We are fully convinced that in the last 10 years, PetroCaribe has clearly demonstrated that it’s only together that we can reach development and [achieve – Ed.] happiness for our peoples,” President Maduro said through an interpreter.

He noted that the meeting with Jamaica’s Prime Minister Andrew Holness and Jamaican Government ministers was marked by dialogue on cooperation and a strong will to continue efforts to further unite both countries.

President Maduro added that improvements to trade relations, particularly through the PetroCaribe Agreement, will serve to further strengthen the stability and economic development of Latin America and the Caribbean.

He said both governments will hold high-level meetings in three months to finalise agreements made on economic trade policies.

Prime Minister Holness conveyed appreciation for Venezuela’s expressed commitment to the PetroCaribe arrangement, and said Jamaica is committed to the Agreement which has contributed to the country’s energy security as well as its economic and social development.

PetroCaribe, which began in 2005, is an agreement between Venezuela and some Caribbean territories to purchase oil on preferential payment conditions. It allows member nations to buy oil at market value and only pay a percentage of the cost up front, with the balance being paid over 25 years at one per cent interest.

Countries under the Agreement are allowed to purchase 185,000 barrels of oil per day on these terms. ~ Curaçao Chronicle ~