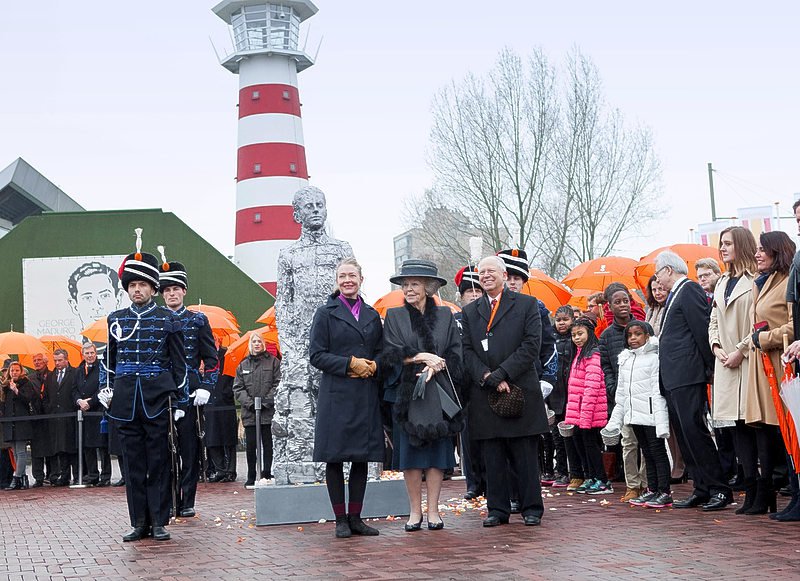 Princess Beatrix and Madurodam Mayor Iris de Ruyter de Wildt in front of the “Big George” statue at Madurodam in The Hague on Wednesday.

THE HAGUE–The Madurodam Children’s Fund was officially launched on Wednesday, at Madurodam in The Hague, in the presence of Princess Beatrix and The Hague Mayor Jozias van Aartsen.

Heroism, courage and empathy are the key pillars of the donation policy of the new Madurodam Children’s Fund, which was launched during the festive gathering. Besides Madurodam’s patron Princess Beatrix, also present at that gathering were family members from Curaçao of the World War II hero and resistance fighter George Maduro.

The life and characteristics of George Maduro, who at age 28 died at concentration camp Dachau on February 8, 1945, were the source of inspiration for the donation policy of the newly established children’s fund. Since the miniature city Madurodam opened its doors in 1952, the foundation has donated almost 33 million euros to charities which benefit the wellbeing and development of children.

The Madurodam Children’s Fund is convinced that every child has something big in him or her. The fund wants to contribute to the personal development of children and inspire them to put in something positive into society. The fund will focus on projects that stimulate self-confidence, self-reliance, courage and empathy.

On a yearly basis, the fund will donate between 600,000 and one million euros; 10 secondary school students from the region of The Hague will be involved in the selection of the projects. These students, who will change every year, make up Madurodam’s Council of the Mayor and Aldermen. In this manner, the students will learn about social issues, how to define and to contribute to solving these issues.

In the presence of many guests, including pupils and students of Dutch Caribbean descent, Madurodam Mayor Iris de Ruyter de Wildt and The Hague Mayor Van Aartsen unveiled a statue of “Big George.” The statue, unveiled on the day of his death, depicts the war hero at an adult age.

“Big George” together with the statue “Small George,” which was also created by artist Jikke van Loon, has been donated to the city of The Hague. The monument for the war hero is now complete. Madurodam has commemorated the life of George Maduro in several ways in the past year in honour of his 100th birthday.