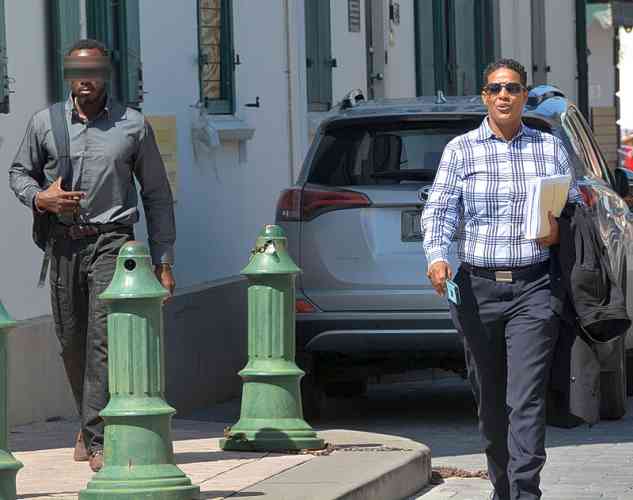 PHILIPSBURG–A suspect in the so-called Mahi-Mahi case involving a shooting at The Westin St. Maarten Dawn Beach Resort and Spa’s parking garage on May 29, 2016, was acquitted Wednesday for lack of evidence.

The reason for the shooting has never become clear, but the Prosecutor’s Office believes it concerns a rip-deal that got out of hand. According to a witness, the rip-deal involved the sale of five kilos of cocaine.

Criminal Intelligence Service CID stated that Kareem Lake (34), who is known to be involved in drug-related crimes, would have been involved in the deal together with his cousin L.W. (39) and a man identified as “Niño.”

On December 27, 2017, Lake received a prison sentence of 365 days, 263 of which were suspended, on two years’ probation, for possession of an amount of US $48,700 in counterfeit money. He was acquitted of the illegal possession of a firearm.
Lake and his cousin, who stood trial on Wednesday, were both severely injured in the shooting. L.W. had been released from prison just before the shooting after serving seven years and nine months for a rip-deal with a fatal outcome.

Similar to Lake, L.W. also denied any involvement in the shooting and that the packages with counterfeit money that were found in Lake’s car belonged to him.
Both claimed they had gone to The Westin for the delivery of a rental car. While at the hotel parking lot, Lake and L.W. were confronted by two armed men. They wanted to kill them and took his gold chain and watch, Lake claimed.

Photos of a Glock firearm and pictures of the wrappers in which the money was packed were found on Lake’s phone. However, he denied possession of the firearm and the wrapping, despite the fact the pictures seem to have been taken on the bedspread in his bedroom.

The Prosecutor said during the hearing of Lake’s case that it was “very frustrating” that no one could be charged for involvement in the shooting – during which 11 bullets were fired – as technical and forensic evidence were lacking.

Security guard by profession L.W. told the Judge on Wednesday that they were confronted with a man carrying a firearm at the garage. He was shot in his left shoulder and skull.
“I did not know what happened next. I woke up in Santo Domingo,” he told the Judge. L.W. said he is still suffering of his injuries and is lucky to be alive.
“I did not know of any objects in the car,” he said in denying that the shoot-out had happened against the background of a rip-deal involving cocaine and counterfeit money.
“I was out after I was shot,” he said. The bag with counterfeit money, however, was found at his feet.

The Prosecutor said witness statements went in different directions, but according to him the gun violence originated from a rip-deal which went wrong and escalated into a “Wild West scene.” Lake and L.W., however, could not be linked to the gun violence, he said.
According to the Prosecutor, L.W. made the deal and showed the money to the sellers. For the possession of counterfeit money and an illegal firearm, he called for a prison sentence of 30 months and also called on the Judge to order the defendant’s immediate detention.
In her client’s defence, attorney Brenda Brooks pointed out that Lake was acquitted of firearm possession. Where the money was concerned, Brooks said that her client L.W. was unconscious at the time. She said the money could have been planted at his feet without his knowledge. She also stated that no finger prints were taken.

After a 27-minute recess, the Judge announced that he would acquit L.W. for lack of evidence.A co-suspect had provided an incriminating statement, but the Judge said he was reluctant to use this statement as evidence because it was considered unreliable.
The Judge arrived at the conclusion that there was insufficient evidence for a conviction, also of possession of counterfeit money because the defendant had been unconscious at that time.