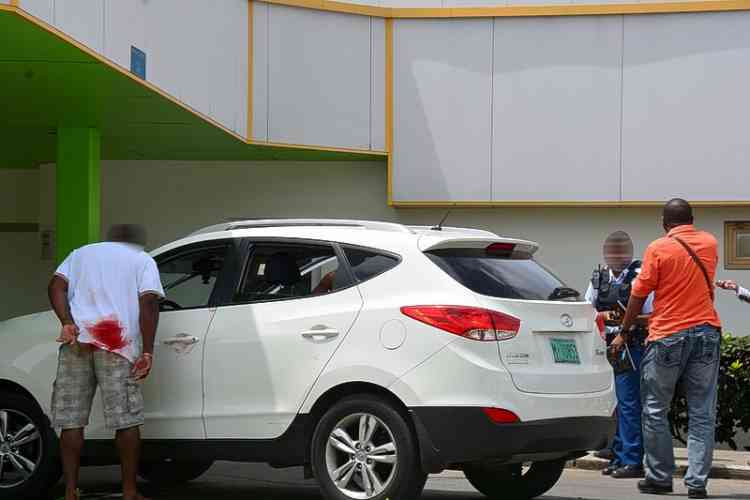 PHILIPSBURG–One of two suspects in the so-called Mahi-Mahi case received a prison sentence of 365 days, 263 of which were suspended, on two years’ probation, for possession of an amount in counterfeit money.

On December 6, 2017, The Prosecutor’s Office requested a prison sentence of 30 months for 34-year-old suspect Karim G. Lake, who stood trial for the possession of US $48,700 in counterfeit money and the illegal possession of a firearm.
The Mahi-Mahi investigation started after a shooting at The Westin St. Maarten Dawn Beach Resort and Spa’s parking garage on May 29, 2016.
The reason for the shooting has never become clear, but “it has all the appearance of a rip-deal that got out of hand,” according to the Prosecutor during December’s Court hearing. According to a witness, the rip-deal involved the sale of five kilos of cocaine.
Lake and his co-defendant L.W. (39) were both severely injured in the shooting. L.W. had been released from prison just before the shooting after serving eight years for a rip-deal with a fatal outcome. L.W.’s case will be dealt with early this year.
Lake denied any involvement in the shooting and denied that the packages with counterfeit money that were found in his car belonged to him.
He claimed he had gone to The Westin to see a person who wanted to rent a car. While at the hotel parking lot, Lake and L.W. were confronted by two armed men. They wanted to kill them and took his gold chain and watch, Lake claimed. However, these items were later found in his car.
Photos of a Glock firearm and pictures of the wrappers in which the money was packed were found on Lake’s phone. However, he denied possession of the firearm and the wrapping, despite the fact the pictures seem to have been taken on the bedspread in his bedroom.
Lake, who is a first offender, was held in detention between May 29, 2016, and September 8, 2016.
The Prosecutor said it was “very frustrating” that no one could be charged for involvement in the shooting – during which 11 bullets were fired – as technical and forensic evidence were lacking.
However, he did find Lake guilty of possession of counterfeit money and an illegal firearm. For these crimes the Prosecutor called on the Judge to order the defendant’s immediate detention.
In its ruling of December 27, 2017, the Court said it was proven that Lake had been in possession of counterfeit money. He was, however, acquitted of possession of an illegal firearm as the Judge did not find sufficient evidence in the casefile.
The Court dismissed the suspect’s statement that he had been the victim of a robbery and that the money found in his vehicle belonged to his assailants.