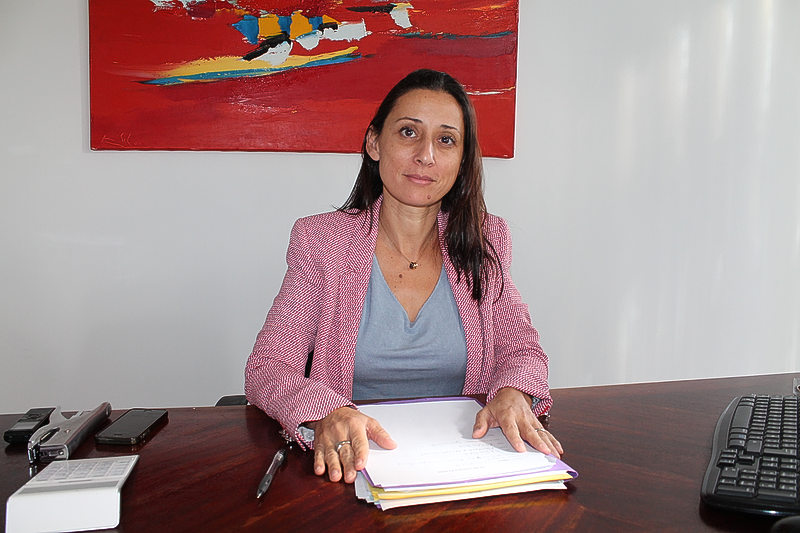 MARIGOT–Maître Delphine Tissot, the lawyer acting for three immigration officers of Police aux Frontières (PAF) subjected to a tirade of verbal abuse from Nadika Stephen last year, said Tuesday she was very confident the justice system would not bow to pressure from Stephen’s heavily reinforced defence team, support from the Soualiga Grass Roots Movement, or key witnesses/speakers brought in from Guadeloupe.

“Whether you have five lawyers or one lawyer, the facts of the case are still there and very clear. It does not change anything,” she said. “This is about a woman who made outrageous and vulgar verbal attacks towards officers of the law, which is totally unacceptable and has to be condemned.”

The Nadika Stephen case was heard in court last week Thursday amid huge public interest generated by Soualiga Grass Roots Movement. It concerned a mother, Nadika, reacting emotionally to the arrest of her son Kevin during an identification card ID control in Bellevue on June 16, 2015. He was subsequently fined for not producing his ID.

According to Tissot, on the same day she heard her son had been placed in custody Nadika contacted the Chef de Cabinet at the Préfecture to demand her son be released as quickly as possible. She also went on the radio to condemn the arrest and actions of the police.

Stephen went to the PAF headquarters with supporters and unleashed abuse towards police officers St. Martiner Samuel Gumbs, Fabien Lavalee and Christophe Charroin. Those officers are now claiming civil damages at 3,000 euros each for being insulted.

The Prosecutor charged Stephen with two counts of outrage against the law enforcement officers.

Tissot indicated some of the words used by Stephen cited in court papers were: “I s**t on France; I s**t on the French passport; you are immigrants; dirty whites, go home, dirty dogs.”

She said Stephen had also referred to Samuel Gumbs as “a dirty Haitian.”

Tissot said she had no doubts the police officers had acted professionally at all times during controls, based on their training and within the confines of their duties.

“Aside from the arrest itself, there was no mention in court at any time of any provocation on the part of the police officers that could have caused the outburst from Stephen, or by Stephen herself. She decided to make contact with the PAF to vent her fury inside their own offices,” Tissot said.

“My job was to remind the court that St. Martiners are not above the law. Stephen’s actions were very rude, against the police and against France.

“Police officers have a right to conduct their duties without harassment, abuse or insults. They have a right to be protected in their work, which also carries a certain amount of risk. They already have a difficult job to do. They are human beings, and fathers with families.”

The lawyer said she believed, as did Prosecutor Yves Paillard, that the defence team’s strategy was to turn it into a racial case – French authorities against black St. Martiners.

“The defence brought up issues to deflect attention from the case at hand. They were moving racial issues from one setting to another setting. Most of the supporters in the court that day were from Guadeloupe, the five lawyers, law professor Julien Merion and union leader Elie Domato. Only Daniella Jeffry was from St. Martin. I think they were trying to move the problems they have in Guadeloupe to St. Martin.”

For Maître Tissot, who has defended the PAF in similar cases before, this was an unusual case in terms of how long the hearing lasted – almost seven hours – and because of the publicity it generated.

Asked what she thought about the suggestion from Soualiga Grass Roots Movement that the Territorial Police should join the PAF on controls because the local police would be able to identify local St. Martiners better than the PAF could, Tissot dismissed the idea.

“The local police have their responsibility to secure Marigot and protect citizens, and St. Martiners,” she said. “Secondly you cannot mix the two competences. The PAF operates under the auspices of the State and the Ministry of the Interior. There are important obligations, responsibilities and rules that are clearly defined.

“Daniella Jeffry told the court that the police should be able to recognise who is a St. Martiner and who is not and the Soualiga Grass Movement said the same thing. In a practical sense the PAF cannot work like that. It goes against republican democratic rules.

“Is Jeffry suggesting controls be done by visual face recognition only? No, of course that will never work. The only way to guarantee identification is to ask for ID.”

Tissot said part of Stephen’s defence team strategy was to spend time examining the police reports for any inconsistences and contradictions. She acknowledged that if the defence was able to convince the judge that there were errors in the reports, the case could be thrown out.

Understandably, she declined to comment further except to say: “They [the defence – Ed.] are hoping to find something in the reports that will overshadow the verbal atrocities.”

Prosecutor Paillard has called for a three-month suspended prison sentence and a 2,000 euro fine for Nadika Stephen.

Tribunal President Gérard Egron-Reverseau will give his verdict on this case on January 19, 2017.