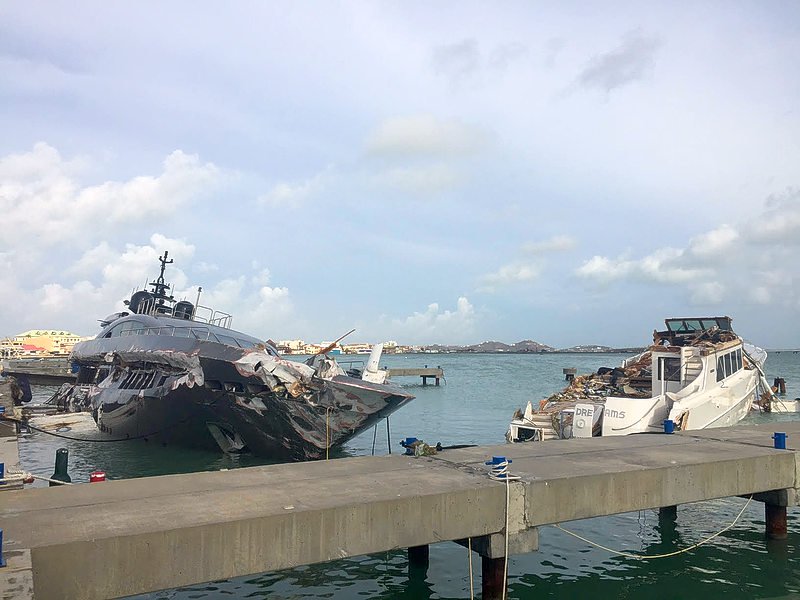 SIMPSON BAY–Several major marinas are expected to open by November 1 at about 25 per cent of their normal occupancy potential. Approximately 40 per cent or more of their slips should be open by December.
St. Maarten Marine Trades Association (SMMTA) fully expects the mega-yacht sector “to rebound almost immediately with some yachts expected to return to St. Maarten as early as the end of October,”

association president Brian Deher told The Daily Herald. This is based on the outcomes of meetings held at the Monaco Boat Show by several SMMTA members with yachters.
The race now is to open as many slips as possible as quickly as possible. “We believe demand for dockage will outweigh our supply of slips,” said Deher.
The marine sector, in general, suffered severe damage consistent with the rest of the island. The marinas specifically suffered major damage as well and have scores of sunken boats that need to be salvaged and removed before the facilities are able to open up to accommodate vessels or the season.
As reiterated by SMMTA over the years, he said the marine sector has the ability to rebound very quickly, because yachts are virtually self-sufficient and marinas are generally able to get back online quicker than many other tourism based sectors.
The majority of SMMTA’s membership, comprised service providers, riggers, marine chandeliers, retail stores and agencies, “are already up and running and will be ready to provide the same exceptional services and products this high season that St. Maarten has become known for over the past decades.
The association is pleased that members are “aggressively cleaning up and rebuilding our businesses, facilities and lives in spite of the devastation wrought by Hurricane Irma.”
The projections for the winter season “would not be possible without the amazing job everyone on St. Maarten has done cleaning up and restoring a sense of normality after the passing of Hurricane Irma,” he said.