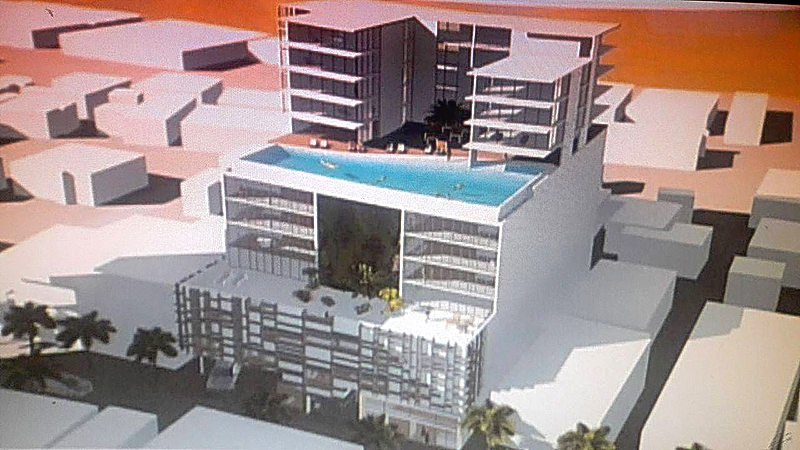 PHILIPSBURG–Minister of Tourism, Economic Affairs, Transport and Telecommunication (TEATT) Ingrid Arrindell is working on a major hotel development for the Down Street area.

The plans are in the early stages, but The Daily Herald understands that Sunwing Development and the Ministry are planning a thirteen-floor boutique hotel opposite Sea Palace in the open lot close to Walter Plantz Square.

The building will be the home of the St. Maarten Tourism Authority (STA) with several amenities included such as a parking garage for visitors who visit Walter Plantz Square and the beach. The overall development is part of the upgrading plans for TEATT and coalition partner Member of Parliament (MP) Silvio Matser who supports the Minister. While no official announcement has been made by the Ministry, Matser appeared on “Oral Gibbs Live” television programme on Monday, where he announced some of the plans.

The Sunwing group has been looking at several locations on the island to invest and construct an all-inclusive hotel. The Ministry has pitched the boutique hotel to complement the recently established STA, and is seeking to hire an interim director to complete the tourism body. Interviews for the post have been completed and the person is said to be a young, energetic St. Maarten national.

The purpose of the STA is to assist temporarily in carrying out the tourism policy of the Government of St. Maarten as a tourist destination; to support the growth of St. Maarten’s land- and sea-based tourism by providing the public and private sectors with focused, sustainable and productive marketing, and the enhancement of the visitor experience.

This project will take two years to complete. Further plans indicate a home-porting location for the Harbour Group and the extension of the entire Down Street promenade.

Source: Daily Herald
Major STA development in the works for Down Street