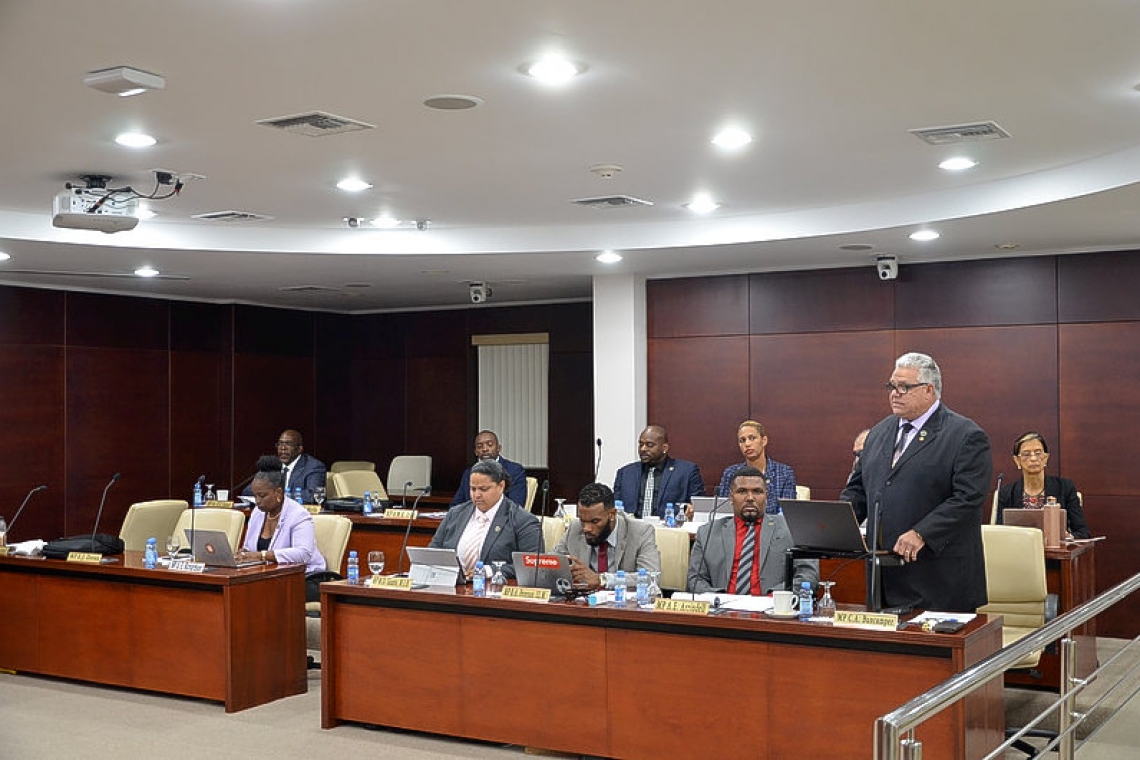 PHILIPSBURG–A majority of Members of Parliament (MPs) were critical of the draft Criminal Procedure Code in Friday’s public plenary session of Parliament, highlighting issues with provisions on crown witnesses, among other things.

The passing of the draft Criminal Procedure Code has been emphasised as necessary to comply with the recommendations of the Caribbean Financial Action Task Force (CFATF). St. Maarten is currently in the third round of the CFATF’s mutual evaluations and may be given another public statement if actions to combat money-laundering and terrorism-financing are deemed insufficient by the regional body in May.

According to Parliament Chairperson MP Rolando Brison, this amended Criminal Procedure Code would change the existing code by adding the right of suspects to consult legal counsel before interrogation, a revision of legislation concerning DNA and hearings via teleconference, and establishing that procedures are in line “as far as possible” with other countries in the Dutch kingdom, among other things.

He said Parliament had received a response from the St. Maarten Bar Association on the crown witness provision in the draft Criminal Procedure Code on September 20, 2019, and from the Prosecutor’s Office on October 7, 2019. The Court of First Instance gave its opinion on October 16, 2019.

Before this meeting of Parliament, amendments to this legislation were submitted by then-independent MP Brison and United Democrats (UD) MP Sarah Wescot-Williams. Brison withdrew his earlier amendment at the beginning of Friday’s meeting. He later told MPs he would submit other amendments.

At the beginning of the meeting MP Claudius Buncamper of United St. Maarten Party (US Party) proposed that MPs’ speaking time be increased to 30 minutes in the first round of questions and 20 minutes in the second round. This was passed, with 11 MPs voting for the proposal and four voting against. MPs Melissa Gumbs and Rhaeyhon Peterson of Party for Progress (PFP) and Ardwell Irion and Egbert Doran of National Alliance (NA) voted against the proposal.

While admitting that the draft Criminal Procedure Code’s handling has dragged out for too long, Buncamper cautioned against passing the code quickly because of the threat of an instruction being placed against St. Maarten by the CFATF. “Every time we hear the word ‘instruction’ we start to scramble and we make the wrong decisions. … We might tie our country to something we don’t want it tied to,” he said, adding that the draft law still has flaws to be remedied.

MP Grisha Heyliger-Marten of United People’s (UP) Party posed a multitude of questions during the meeting, which she said she would e-mail to Justice Minister Doran. Among her questions, she asked whether the crown witness provision had ever been sent to the Council of Advice. She also questioned the privileges that crown witnesses are to receive under the draft law, and its associated budget.

“Whose interest would be served if this law is passed today, giving the prosecution even more investigative power outside of the independent supervision of a Judge of Instruction? More power to infringe on human rights, more power and tools in an already lopsided system,” asked Heyliger-Marten.

MP Omar Ottley of UP Party said he fully agrees with the need to comply with the CFATF’s recommendations. However, he said he does not agree with the recommendations being “slipped in” with the draft law.

He said MPs should not be rushed to pass the draft law. “I am not a legal expert. So, I cannot dissect an entire penal code in a week or two. I refuse to pass something that I do not know about. But now my hands are tied. It’s either I shoot myself in the left or the right foot,” said Ottley. He also questioned the powers given to the prosecutor under the draft law.

MP Rodolphe Samuel of NA asked when the CFATF recommendations had been fused into the draft Criminal Procedure Code. Samuel also questioned the definition and rules surrounding crown witnesses, such as what entity would determine who can become crown witnesses and whether there is a limit to the number of crown witnesses in a case.

Unlike the MPs who spoke before her, Gumbs said she is ready to vote on the draft Criminal Procedure Code.

“Having worked myself in the financial services industry in the global arena, I have sufficient reason to conclude that voting against [the draft law] is voting to throw the country under the bus. …

“If a measure comes against us that hampers our ability to engage in international transactions, it impacts more than just the mother trying to order a bed-set off Amazon. It impacts the ability of Prime Distributors to order food; of Sol and Texaco to order fuel; of distribution agencies to order medication. That is the true potential impact facing us. I am not a fond of gambling, so I do not want to gamble on these possibilities,” she said.

MP Christophe Emmanuel of NA criticised passing the draft Criminal Procedure Code and not knowing its consequences. He said he is not ready to vote on the draft law because it “still has some issues which need to be ironed out.”

The meeting was adjourned after questions posed by Peterson and is to be reconvened next week.