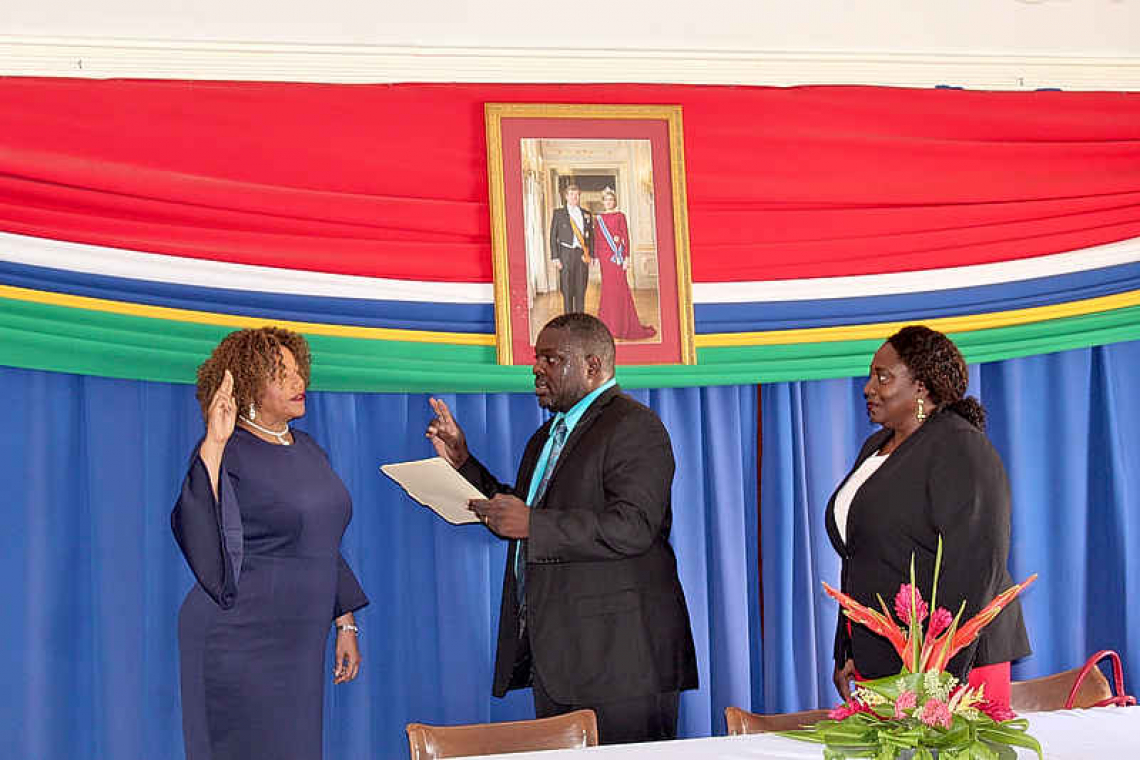 ST. EUSTATIUS–Malvern Dijkshoorn-Lopes was officially sworn in as the Island Secretary during a ceremony held at Vincent A. Lopes Legislative Hall on Tuesday, April 20.

Dijkshoorn-Lopes’ position became official on April 11, but out of respect to the late Militza Connell-Maduro who recently passed, the government did not want the two events to cross. Francis congratulated Dijkshoorn-Lopes on her long-awaited achievement.

Newly-sworn-in Island Secretary Malvern Dijkshoorn-Lopes (centre) and her brothers and sisters stand under a portrait of their late father, former Island Councilman Vincent A. Lopes, after whom the Legislative Hall is named.

New Island Secretary Malvern Dijkshoorn-Lopes (centre) with some of her colleagues.

Dijkshoorn-Lopes celebrated her 25 years in the Statia’s civil service this year. She started working for the government on January 1, 1996, as Head of the Government Information Service and led the department for 20 years.

Dijkshoorn-Lopes took up the function of Acting Island Secretary in 2016. In the past five years, Statia’s civil service was restructured, whereby four directorates were established: Economy, Infrastructure and Nature, Social Affairs, Transport (airport and harbour), and Bedrijfsvoering (business operations).  The reorganisation is almost complete, but is still ongoing, Francis said.

Dijkshoorn-Lopes will lead the Statia’s civil service. A new Government Administration Building is in the planning phase, where all the government offices will be housed under one roof.

“Malvern’s task is quite huge, but I can speak from working with her myself in the past 14 months and her past 25 years of experience, where I can attest to her professionalism, her commitment to public service and by extension serving the community of Statia, that she is more than up to the task to lead this organisation into the robust organisation that we want it to be with the cooperation and the commitment of the civil service,” Francis said.

The biggest task ahead, Francis said, will be to restore normal democracy on the island.

Dijkshoorn-Lopes said she is grateful for the people with whom she has worked, because without them she would not be where she is today and for this she is grateful.

She said she was very pleased to be appointed.

To other civil servants, Dijkshoorn-Lopes said, “Never let people’s opinion of you determine what you are capable of doing. Keep on striving.”

She thanked former Acting Island Governor Julian Woodley, Progressive Labour Party (PLP) Island Councilman Clive van Putten, former Government Commissioners Marcolino Franco and Marnix van Rij, and Deputy Government Commissioner Alida Francis for recognising her potential and allowing her to grow. She thanked the government for recognising that when a government invests in its civil service, you get the organisation that you want to have. She thanked her family, friends and colleagues for being there for her.

After the ceremony, the Island Secretary invited attendees to the boardwalk to celebrate with her.