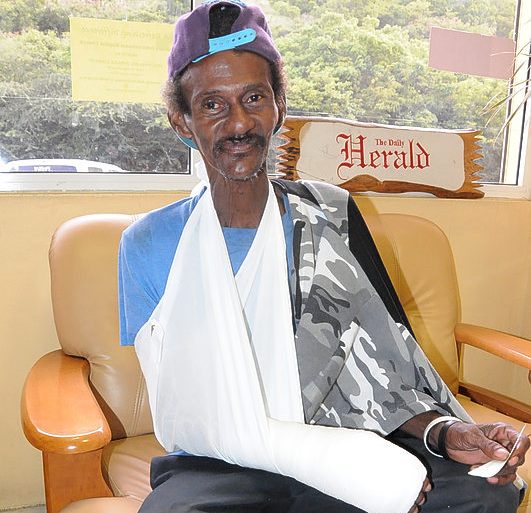 PHILIPSBURG–Glenville Riley does odd jobs for a living and often hangs around Texaco gas station on Bush Road in the evening hours. He claims that two police officers attacked him on Monday afternoon and broke his arm.

Riley visited the offices of The Daily Herald and explained what had taken place before his encounter with the two officers.

“I was in Philipsburg and I went to visit my friend Sammy from Majestic Fashions on Back Street on Monday afternoon. I walked in the store and asked for Sammy, but his brother told me that he was not there. I wanted to ask Sammy for a dollar to take a bus to go home, but since he was not there, I asked his brother. The store owner from next door came in Majestic and started to tell me to get out of the store.

“I did not pay him no mind, but he started to tell Sammy’s brother to call the police. I left the store and moments later, I saw police close to the store, I really wanted to go home, so Sammy’s brother still gave me the dollar and I started to walk away. All of the sudden while walking one of the officers started to hit me with his nightstick. He continued to just hit me with the stick while the other female officer stood there and did nothing,” Riley said.

He managed to run away and said he could remember the officers laughing and shouting not to come back to Philipsburg.

“My hand was hurting me badly, I started to ask persons on the side of the road to call the ambulance. Ambulance eventually came and brought me to the St. Maarten Medical Center, Dr Mercelina assisted me and put on a cast on my hand.

“I was very mad and right after the doctor finished with me, I walked to get a ride to go to the police station and file a complaint against the officer. A friend of mine saw me, and I explained what happened and he gave me some money to pay for a bus,” stated the injured man.

He arrived at the police station late in the evening and asked to speak to a detective. According to Riley, he was told that it was too late to file a complaint and he should come back on Tuesday morning.

“I went back the next day and guess what, they told me to come back later again. One officer told me not to worry with that and just take care of myself. I think is wrong that these officers just abuse their power and hit people for no reason. This is police brutality, I went again in the late afternoon and I waited in the waiting area for hours until they told me to come back on Wednesday,” stated Riley.

He managed to file his complaint against the officers in question on Wednesday evening and wants the Prosecutor’s Office to step in.

“I am going to the Prosecutor’s Office on Thursday because they need to know what happened. I am a citizen of this country and police are there to keep the peace and protect the citizens. I was abused and I want everybody to know about what they did,” he said.

This newspaper contacted police spokesman Chief Inspector Ricardo Henson on Tuesday about the incident and he said he would get back with a response on Wednesday, but no word on the incident was received from Henson on Wednesday.