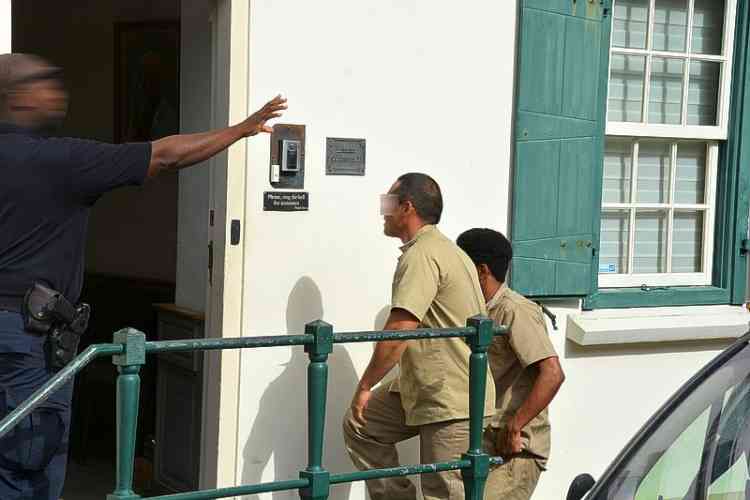 PHILIPSBURG–Reinier Chun-Bon Cheung (32) was sentenced Wednesday by the Court of First Instance to a prison sentence of 36 months, 18 of which were suspended, on three years’ probation for possession of no fewer than six firearms, 1.500 pieces of ammunition and 747 grams of marijuana. He was acquitted of possession of a stolen vehicle.

During the hearing in this case, which took place on February 28, the Prosecutor called for a prison sentence of four years, one of which was to be suspended, on three years’ probation.

The Prosecutor considered possession of illegal firearms with ammunition and marijuana proven but called for acquittal of misappropriation of a stolen vehicle for lack of evidence.
Cheung was arrested on September 25, 2017, after the police were tipped off about a stolen vehicle parked in front of an apartment building on L.B. Scott Road.

Cheung, who lived in the building, was arrested. The weapons and ammunition were found at different locations in the apartment during a search. The vehicle was one of many cars stolen from local car dealers after Hurricane Irma. The Judge agreed with the Prosecutor and the defence that there was no evidence to consider theft or misappropriation of the vehicle legally and convincingly proven.

The defendant had confessed to possession of the firearms, ammunition and marijuana, which were found in his apartment. The Court dismissed pleadings by defence lawyer Shaira Bommel to declare the search illegitimate, as the search was carried out in the aftermath of Hurricane Irma, during which the state of emergency was still in force and law enforcement agents had special authority to carry out searches to prevent looting, without authorisation.
In its decision the Court also considered that the suspect had given his permission for a search.

“The weapons are mine,” Cheung had told the police on the day of his arrest. “I buy arms to protect myself, my family and my business. I’ve inherited some weapons and the ammunition I bought recently in French St. Martin. I found men in French Quarter and they sold me a bag with all kinds of ammunition for US $500. After that I sorted them myself and put them in plastic boxes. There also was a clip for an AK47.”
On February 28, 2018, he stated he was aware that he was not allowed to have firearms without a licence.

He claimed he had forgotten all about the weapons until after Hurricanes Irma and Maria, during which his family business lost one of two of its supermarkets, while the other was under threat by looters.
“I was traumatised,” Cheung told the Court during last month’s hearing. “In 2016, 30 Chinese stores were robbed. My uncle was shot and there was a serial killer on the loose. Looters tried to break into our last and remaining store after Maria. I panicked and bought ammunition one day after Irma,” in French St. Maarten.

“I was very scared. Everything was chaotic after Irma,” he said, adding that it was “never” his intention to take lives or to hurt someone.
In underlining that he did not have any bad intentions, he said his family had started baking bread for 16 hours a day to provide for the needy in the hurricane aftermath. “I personally delivered bread at the police station, White and Yellow Cross Foundation and other institutions,” he said.

Cheung, who works in the family bakery, said the marijuana was for his own consumption. He said he smoked about 10 to 15 grams of the substance daily.
The Judge imposed a lesser sentence, because he took into consideration the special circumstances under which the crimes were committed, namely the “chaotic circumstances” shortly after Irma and personal circumstances, among which were the “charity and community spirit” demonstrated by the defendant and his family in the aftermath of the hurricane. The Court, therefore, decided to impose a partially conditional sentence.