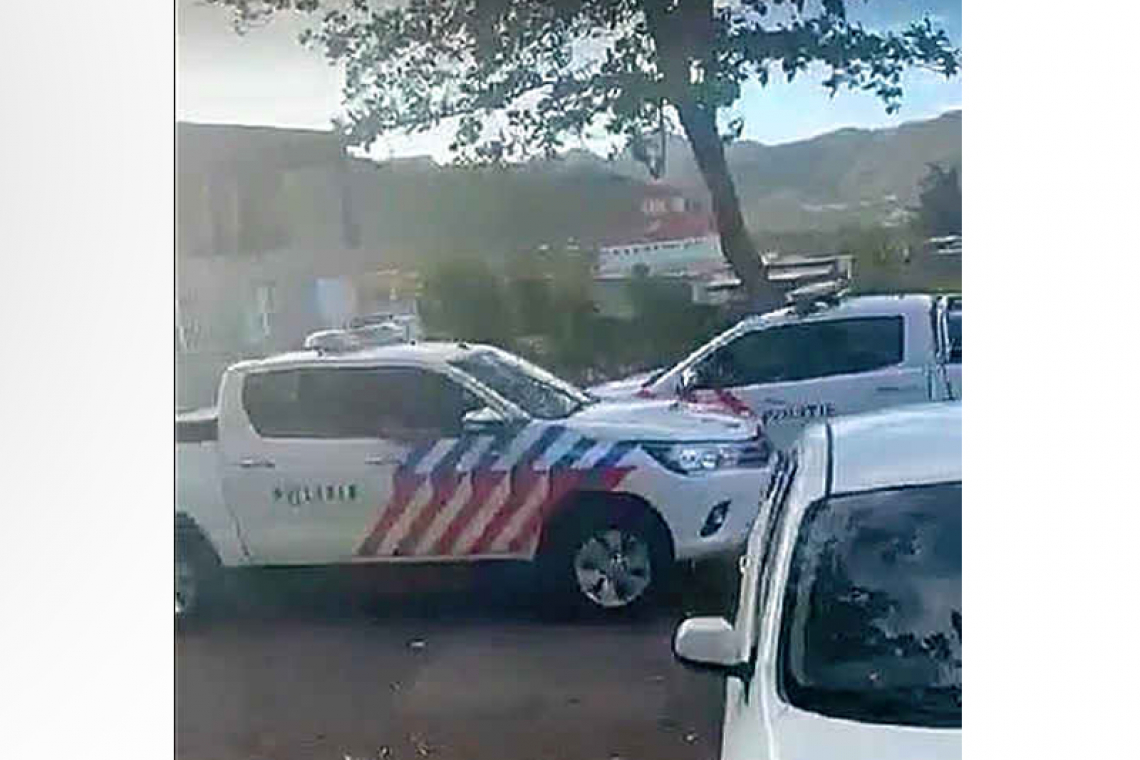 Police vehicles at the location of T.J.H.’s arrest.

ST. EUSTATIUS–The man T.J.H. (1987) was reprimanded by a police patrol in St. Eustatius on Friday, May 7, for threats he made against the safety and lives of police officers based on a previous encounter in September 2020, when he accused the police of assault and causing him bodily damage which he said had required medical attention.

Statia’s Chief of Basic Police Care Inspector Robelto Hodge said H. did not agree with the fact that he was arrested in 2020 during the COVID-19 pandemic at a time when there were active cases of COVID-19 in Statia.

H. was arrested for violation of the emergency ordinance. He resisted arrest and police officers had to use force to subdue and control him and to bring him to the police station, Hodge said.

“T.J.H. was not in agreement and threatened that wherever he’d meet the officer in question who used force, that he would assault the officer. For this purpose. Mr. T.J.H. was approached and reprimanded.”

While being reprimanded, H. made a “big commotion” and solicited bystanders to videotape the discussion that was going on between him and the police at the time, Hodge said.

“Mr. T.J.H. is known by the police and the Justice Department as being violent and a person that would use violence or a weapon, and based on that, the necessary precautions were taken when approaching him.”

Hodge said H. had created “a big scene” by shouting to people in the vicinity to tape the discussion between him and the police. “He threw himself back against the partition at the Congo Bar with both hands up in the air to create the impression that there was some need to put his hands in the air.” After he was reprimanded, he left the area.

H. went live on Facebook later that same day and made some derogatory and insulting remarks about the police once again. Hodge said that H. has been making threats for more than a year now.

“Some time back, the conclusion of that investigation was reported by our Commissioner of Police José Rosales, [indicating – Ed.] that there were no grounds or evidence to substantiate the accusations Mr. T.J.H. made.”

Despite being warned by the police to stop making threats against police officers, H. went on Facebook and again made some derogatory and insulting remarks about police, said Hodge.

“It has been more than a year since T.J.H. has been doing this and the officers did not file a complaint against him, but asked him to refrain from doing so.”

However, last week the officers who were insulted filed an official complaint, after which the prosecutor ordered H.’s arrest. He was also asked to remove the videos from his Facebook page, which he did. He was released after questioning.

The case file against the suspect was finalised and sent to the prosecutor, who will decide whether to prosecute him.