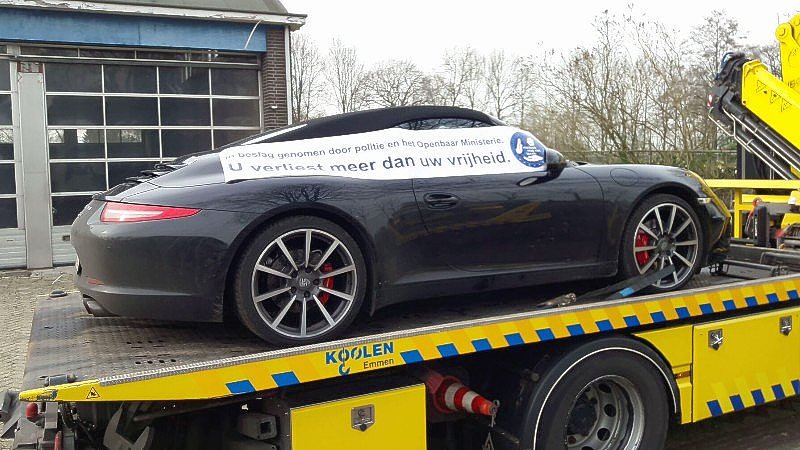 THE HAGUE–A Dutch citizen was arrested in St. Maarten on Tuesday as part of a large-scale, international money laundering investigation.

Police in the Netherlands, Belgium, Germany and St. Maarten carried out a large action in which five persons were arrested, thirty buildings were searched and 8 million euros confiscated in real estate. Tens of thousands of euros in cash were confiscated as well as expensive cars, jewellery, scooters, insurances and gas alarm pistols. The action had not been concluded on Tuesday night.

The searches in Sin Maarten, which amongst others included a scrap metal business on Pond Island, were carried out by the RST and the police in the presence of a prosecutor and a judge of instruction.

A 49-year-old man from the Dutch town Nieuw-Schoonebeek was arrested in St. Maarten on the suspicion of money laundering. He was one of the two suspects who was arrested in a car in the vicinity of Amsterdam in April 2016. The other suspect in the car is still being sought.

The man who was arrested in St. Maarten was one of the main leads in what resulted in a large-scale investigation. Based on several reports of the Financial Intelligence Unit (FIU) and the arrest by the Amsterdam police in April 2016, authorities got the impression that the two suspects in question had a spending pattern that didn’t fit their income.

More than 100,000 euros were confiscated during the April 2016 arrest, while no plausible explanation could be provided about the source of that money. FIU reports are an indication that possibly criminal money is being laundered. This combination was the reason to start a more in-depth investigation into the financial situation of the man residing in St. Maarten and the other, second suspect.

That investigation showed that possibly criminal money was invested in real estate, cars and travels. The results of this financial investigation were the reason to execute searches in thirty locations in four different countries.

The searches were aimed at finding valuable goods and cash for confiscation, as well as getting a hold of the suspects’ financial administration. Specialist detectives were involved in the searches as were money and narcotics sniffer dogs, and search teams of Dutch Defence.

Aside from the 49-year-old man in St. Maarten, police arrested four other suspects on Tuesday: a 42-year-old man from Maasmechelen, a 50-year-old man from Beesd and two women, ages 36 and 50, from Nieuw-Schoonebeek. They are all suspected of money laundering. Further investigation should lead to more information on the revenues, expenditures and money flows. More arrests are not excluded.

The press release issued by the Dutch police on this large-scale investigation revealed the concerns of authorities about the regular investments of criminal money to attain more influence in politics, the private sector or financial sector.

“This mingling of the underworld and upper world is very worrisome. It puts pressure on the integrity and credibility of the upper world. That makes money laundering a truly social problem.”