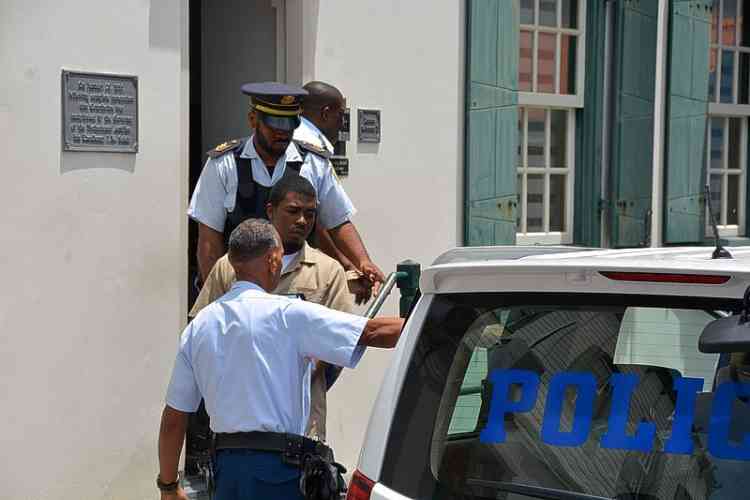 Jamali Naseem Rowendie Hodge escorted into a police vehicle after the June 19 court hearing in his case. (File photo)

PHILIPSBURG–The twenty-year-old man who was sentenced by the Court of First Instance to fourteen years in prison as he was found guilty of the manslaughter of a two-year-old toddler and attempted manslaughter of three other persons who were injured, has withdrawn his appeal against the sentence on Wednesday.

Upon receipt of the verdict the defendant had immediately filed for appeal, but in a surprise move which even took his lawyer off guard, defendant Jamali Naseem Rowendie Hodge informed the three Judges of the Court of Appeals and the Solicitor-General that he would withdraw the appeal. In doing so, he the verdict of July 10, 2019, was rendered irrevocable.

On June 19, Hodge stood trial on murder and manslaughter charges, for which the Prosecutor had requested an 18-year prison sentence. The Prosecutor’s Office had not filed for appeal.

In the incident the two-year-old Jeremy Williams was run over by a white Kia Picanto driven at high speed into a group of seven persons who were on the sidewalk outside a house on Passion Fruit Road in Retreat Estate, around 10:21am January 13.

The child, who was riding a plastic car on the sidewalk, died on the spot of multiple traumas. Three injured persons were transported to St. Maarten Medical Center (SMMC) for injuries sustained during the incident. The Court awarded the victims US $7,400 in financial compensation.

Hodge was the driver of the vehicle. He admitted to the judge in the Court of First Instance he had been speeding and that he was angry at the youngsters in the group over the theft of a motorcycle. He claimed he had been driving so fast that he had lost control of the vehicle and had crashed his car into the group of people, but had not done so deliberately.

The Court rejected this scenario, as it did not find any circumstance that could have led to the defendant losing control of his vehicle. Based on all the evidence, the judge found manslaughter and triple attempted manslaughter proven.

The judge said that in driving his car into a group of persons, the defendant had accepted the possibility that people would  be killed. The fact that the suspect claimed he had not seen the child did not change that, according to the Court, as the toddler had been a member of the group at which the defendant had steered his vehicle. The Court held it against the defendant that his “ill-considered” actions had “disastrous” consequences.

Hodge’s lawyer had pleaded with the Court to declare the Prosecutor’s case against her client inadmissible, or to dismiss him from all prosecution because he had acted in self-defence and had been overpowered by emotions. However, the Court rejected these pleadings.