Home Local News Man sleeps in car, works as a ‘gypsy’ to scrape a living... 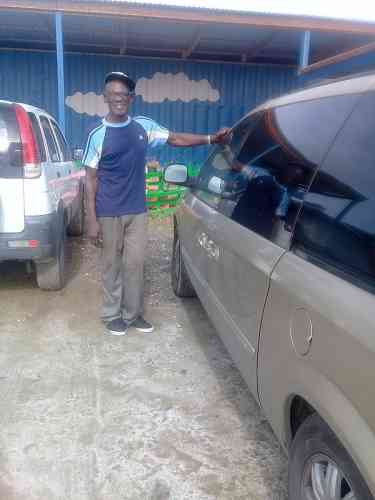 PHILIPSBURG–It is a universal right to have roof over one’s head. In the case of Venroy Cargill (67), his roof serves as his means of scraping together a few dollars and a place under which to lay his head. Cargill’s roof is his car. He is one of Hurricane Irma’s still-homeless St. Maarten residents.

Cargill had a stint in the government-subsidised shelter in Sucker Garden for more than six months before his time was up and he had to leave to fend for himself on a meagre income of US $110 per month in pension and social assistance of some $200 per month. From those amounts, he claims to fork out a few dollars to keep his medical bills up to date.

Cargill, who suffers from high blood pressure, has been living in his car since February. Every night after driving late-night party-goers from the Maho area to their homes as an unlicensed or “gypsy” taxi, Cargill said he parks his car in the lot across from the Philipsburg police station and settles in for a nap as the sun starts to climb into the sky.

Cargill lived in a wooden house in Middle Region prior to the devastation of Hurricane Irma on September 7, 2017. Irma ripped this dwelling away.

Cargill said he has no family with whom he can claim a safer sleeping place. He has two school-age daughters residing with their mother in French Quarter whom he said he assists with the little he has. “I had a lady, but she caused some trouble and that ended, so I am alone,” he said, adding that all he wants is a safe place that is not his car to sleep in every night.

He has not left finding a home up to chance. He has paid NAf. 25 to register with St. Maarten Housing Development Foundation for an opportunity to get an apartment when one becomes available. How he will pay his rent consistently if he should acquire one will be a great challenge.

Cargill worked as a security guard after moving to St. Maarten from Jamaica in 2001. He has since become a permanent resident. Work in the security sector has dried up for him, leaving him without a means of income in his retirement age.

Aside from his personal state, Cargill has another worry. His very elderly and ailing mother in Jamaica is moving towards death. He is worried that he may now not be able to clap eyes on her before her eyes close for good. To mitigate this, he is also putting emphasis on purchasing a ticket to Jamaica to see his mother one last time. “I am putting aside little by little,” he said.

With family and ties in Jamaica, Cargill has not yet decided whether he will return to St. Maarten or stay in his native Jamaica if he makes the trip.