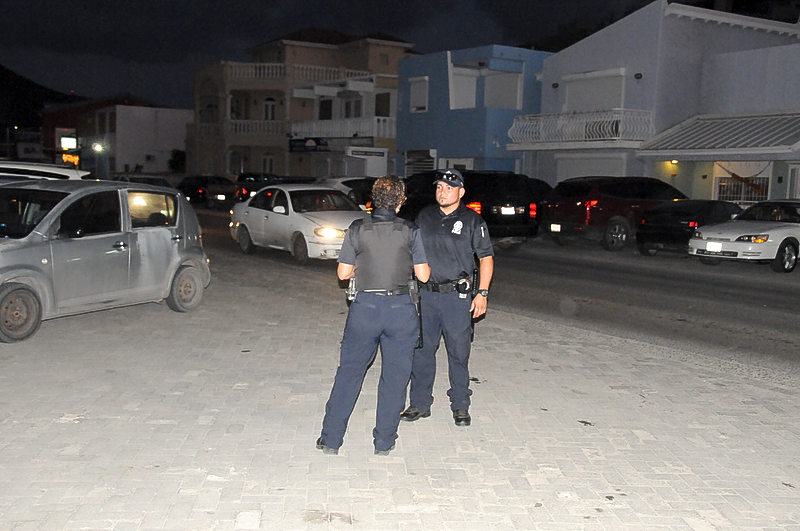 PHILIPSBURG–The St. Maarten Police Force assisted by members of the Police Forces of the Netherlands, Aruba and Curaçao, the Royal Marechaussee, the volunteer corps of Curaçao VKC and St. Maarten VKS, carried out extra patrols in the Simpson Bay area last weekend, as there was a Benefit Concert taking place at Kim Sha Beach.

Police stated on Friday night, “Just before midnight, one of the Bike Officers on Billy Folly Road saw a man driving recklessly that drew his attention. The officer approached the man, but the driver was not amused that the officer signalled him.
“The driver purposely attempted to run over the Bike Patrol police officer with his car. When the police officer noticed what was happening, with a swift, well trained response, he fortunately managed to avoid the vehicle.”
Police said the man drove off, but they were able to get the vehicle detail information. Several patrols were informed by the Central Dispatch Centre to be on the lookout for the vehicle. The same car was found in the Simpson Bay area shortly thereafter.
“The suspect was identified and, due to good police work and combining forces, the suspect was apprehended a bit later at a local establishment in Simpson Bay. The suspect P.B. was arrested at 12:30am on Monday, October 23, and brought to the police station for questioning.
“The Sint Maarten Police Force will not tolerate and will use all means of the law to act against this type of behaviour,” said police on Friday.