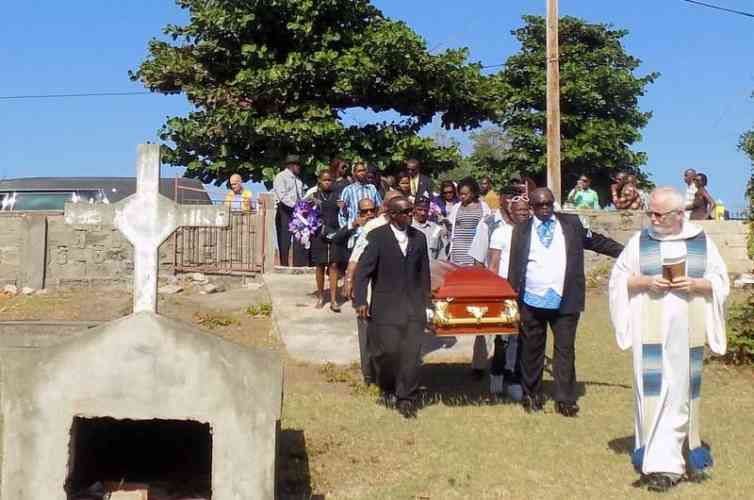 ST. EUSTATIUS–Anthony “Ento” Buntin who drowned on Saturday, March 3, was laid to rest at Salem cemetery on St. Eustatius on Sunday.

Many persons paid their last respects to the 57-year-old man who was swept out to sea by rough waves while picking whelks from the rocks along the seashore at Venus Bay. Buntin was born and raised in Curaçao where he has seven children and 13 grandchildren.

During the service at the Roman Catholic Church, which was led by Pastor Peter de Jong, good friend of the deceased Judith Thomasia said that death is something that is extremely hard to accept, “especially when someone is not prepared to lose a person that is very close to them.”

Thomasia said Buntin moved to Statia 19 years ago. He fell in love with the island and moved there permanently and “refused” to return to Curaçao, even though he missed his family.

She described Buntin as a very laidback person, extremely friendly and loved by the Statia community.

Buntin, who was a mason and mechanic was a hard worker. He liked to play at the domino club and accompanied patients to Colombia. One of his passions was picking whelks.

He used to attend every funeral on the island, whether he knew the person or not, just to show his respect.

His love of being a sharp dresser was known to all. He never wore jeans or sneakers, even when building a house or hiking to pick whelks he would always wear dress pants and shoes.

“We had many wonderful memories together and he was a wonderful person and such fun to be around. Ento had many friends and it is extremely hard for everyone to accept that he is really gone,” Thomasia said.

His daughter Saidubys Buntin expressed her gratitude to those present. “My father lost his family in Curaçao and gained a much larger one here with all of you…I have no words to thank you enough for what you have done for my father,” she said.

The family of the deceased offered their gratitude to everyone who contributed services or goods for the burial.