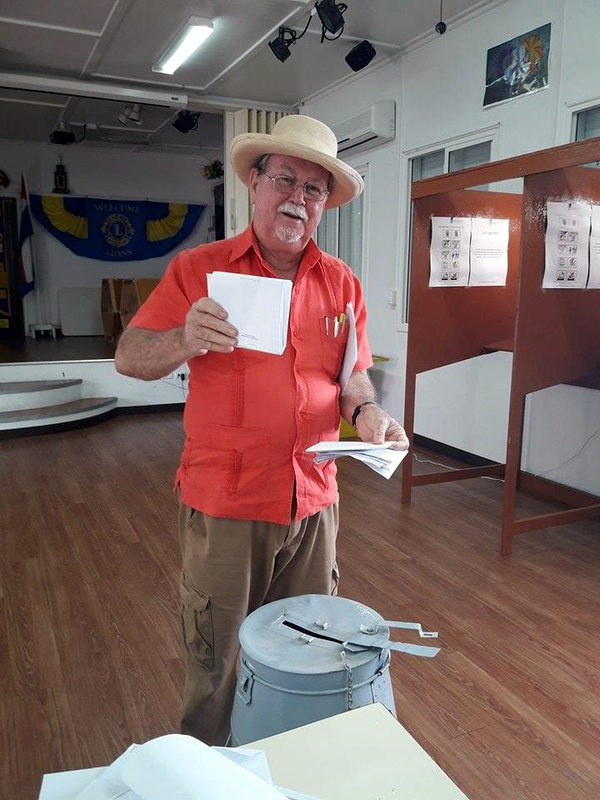 SABA–The majority of Sabans voted for centre-democrat D66 in Wednesday’s election for the Dutch Parliament’s Second Chamber. Saba saw a considerably large turnout of voters. With a population of about 2,000, almost 900 residents were eligible to vote and a total of 385 persons (or more than 40 per cent) cast their votes at the polling stations in The Bottom and Windwardside.

The campaign leading up to this election was evident on the island in the form of a visit from Christian Democrat CDA contender and St. Eustatius resident Koos Sneek, large promotional billboards encouraging participation in the election, several online discussions on why voting was important and even a message from Saba’s own governing party Windward Islands People’s Party (WIPM) on the relevancy of Sabans casting their votes.

When asked why she voted, Desiree Soares-Johnson told Caribisch Netwerk news site, “I thought it was important to vote, because I believe if we don’t vote then it’s as if we don’t have a say. We were given this opportunity. So while I hear people complaining about not knowing enough about the parties, the information is there and you have to educate yourself. We are a small percentage, but we still count. By voting you are showing Holland we have a voice.”

Opposition Saba Labour Party (SLP) leader Ishmael Levenston was at one of the two voting stations to encourage young people to vote. He said it was important for the younger generation to become more informed about the island’s political aspects.

He said it was important to vote as it generates communication between the islands and members of the Dutch Parliament. “We are not satisfied with everything, but I have a gut feeling eventually we’ll get there,” said Levenston.

Several young Sabans had a hard time deciding whether they should vote and for whom to vote. Young voter Lionell Charles said, “Even if you don’t know who to vote for, at least vote blank so this can be an indication that Holland needs to find out why there were so many blank votes. If a lot of persons voted blank then maybe they will see for the next time that more information is needed.”

Well-known political activist Dave Levenstone was a strong supporter of Party for Freedom PVV Geert Wilders during the election campaign. “I think if Wilders were to visit Saba he would be able to do more for the island than the other political parties who have made promises and not delivered,” he commented when asked why he voted for Wilders.

As an example he referred to the Spies Evaluation Report. “The Island Governments have asked for more leeway, but nothing is being done to allow this to happen.”

Levenstone looks past Wilders’ controversial views on Islam. “I think that’s just street talk in Holland and it doesn’t affect us.”

By contrast, former Commissioner and WIPM leader Will Johnson weighed in heavily on Socialist Party (SP), which campaigned for pushing back the retirement age to 65.