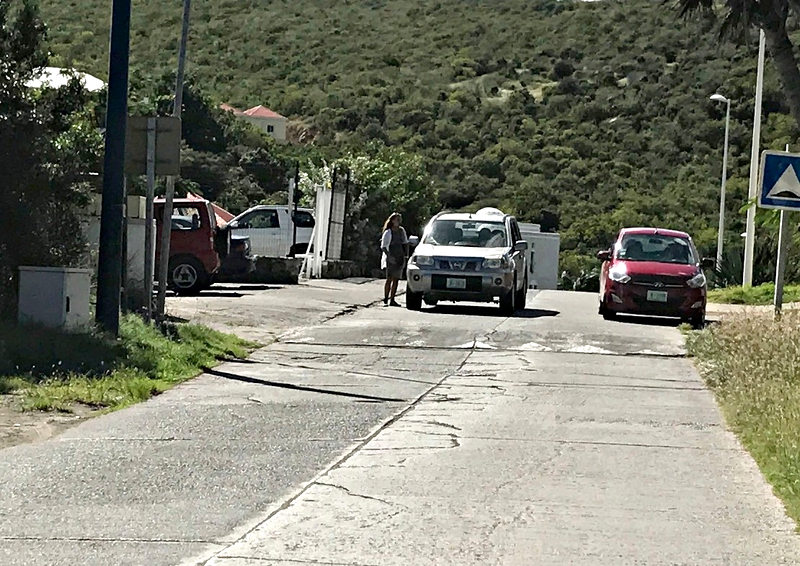 MARIGOT–Commandant Sébastien Manzoni agreed Monday the current penalty for illegal timeshare selling on the public road on the French side is “too light” and said he will be discussing the matter with the Prosecutor to come up with a stiffer penalty from the Penal Code that will be more effective in deterring illegal selling practices.

Manzoni was responding to complaints from Oyster Pond residents who are once again fuming over the activities of timeshare vendors, more commonly referred to as Off Premises Consultants (OPCs) who they say are engaging in illegal practices and behaving in a deplorable manner, all of which residents say disturbs the peace in a normally quiet neighbourhood.

Residents have written to Préfète Déléguée Anne Laubies with their complaint, urging her to intervene, and are ready to start a real offensive to defend their rights as French citizens. Laubies told The Daily Herald she is “looking into the matter.”

Because of calls to the Gendarmerie about the problem, Gendarmes have intervened on a few occasions to issue the “Procès Verbal” to offenders, a first level fine of 90 euros.

Manzoni said the timeshare selling problem has to be weighed against responding to armed robberies and other serious crimes that take priority, and it would be inappropriate to put too many resources onto the timeshare problem where lives are not at stake.

But he did anticipate there will be more controls on OPCs working on the public road in the coming weeks based on the seriousness of the complaints.

“It seems, after all these years, that OPCs are above the law when the law should be the same for everyone,” one resident told this newspaper. “It is absolutely forbidden to organise timeshare lotteries, promotions, on the French side by law. It is absolutely forbidden to conduct tombolas on the public road without authorisation (the fines are very high, up to 100,000 euros). They [OPCs – Ed.] don’t have a right to stop cars in the middle of the road. Only Police and Gendarmes can do that.

“They don’t have the right to park permanently on a private parking space and yell to tenants who live there that they have to park somewhere else because they need the parking space to ‘work’.”

Another resident said neighbours who are most affected are those closest to OPCs who are “camping” and have to endure yelling, phones on speaker, car horns blaring because cars can’t pass.

“Then there are the insults and comments when they see us on our porches,” he added. “They are constantly looking at us and others and can call whoever to let them know which house is OK to break into because nobody is home. We don’t feel safe anymore; this is stalking and everything you can imagine for which in any other country in the world they will be picked up and go to court and jail.

“Why can those people do this here, while they all work for the Dawn Beach Club/Westin Hotel, Oyster Bay and other Dutch-side timeshare?

“Over the last week Gendarmes have been coming several times and issued a Procès Verbal (PV) to several of the OPC people but they stay away a day or two and are now back again.”

Residents say the website St. MaartenTimeShare.com has photos and comments from many tourists and visitors about the issue. St. Martin Tourism Office and Le Mercure Hotel have also reported problems of harassment by OPCs.

Residents add if the issue is not resolved they will have no option but to go to the international media, magazines and TV, that could result in a very damaging report for the island.

Efforts to get the timeshare resorts such as Westin to comment have received the run-around; either the person in charge is not available, or they hang up the phone.