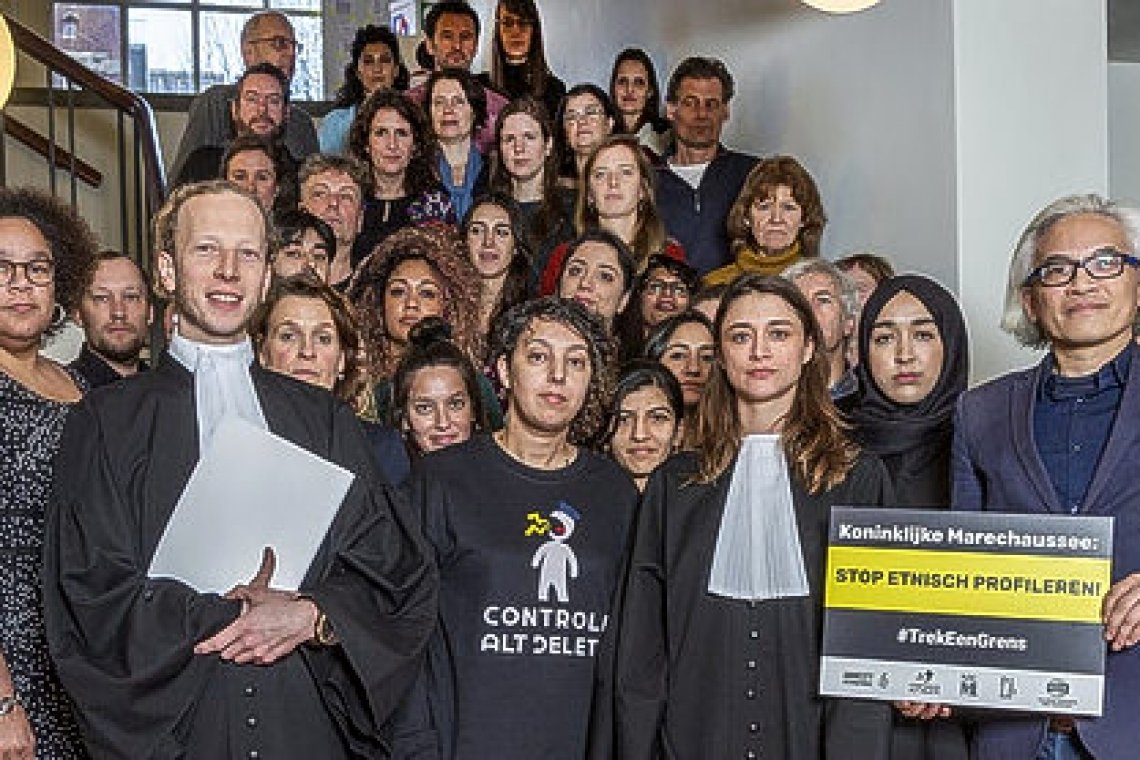 The coalition that has dragged the Marechaussee to court.

AMSTERDAM–A coalition of four organisations – including human rights watchdog Amnesty International – and two civilians have dragged the Dutch state to court over ethnic profiling by the Marechaussee. The court case, for which hearings began on Wednesday in Amsterdam, charges that Marechaussee immigration officers stationed at border entry points often target people because of their appearance, their skin colour or their ethnic origin.

“That is in violation of their human rights and the laws of the Netherlands,” Amnesty International stated in a press release on Wednesday.

Amnesty International’s co-signers for the court case are the Public Interest Litigation Project (PILP) of the Committee of Jurists for Human Rights, anti-ethnic-profiling organisation Control Alt Delete and anti-discrimination bureau RADAR, as well as civilian Mpanzo Bamenga, a former Eindhoven City Councilman in 2018 who fell victim to the Marechaussee’s tactics.

The human rights watchdog said the Marechaussee uses these criteria to determine whether someone arriving at an airport will be pulled out of the line for a thorough inspection. “They also use general risk profiles that are based on ethnicity, like men who walk fast, are dressed well and don’t have a specific Dutch appearance. That is ethnic profiling, which is discrimination.”

The Marechaussee has confirmed that ethnicity does play a role in risk profiles that its officers use to select civilians for its so-called “mobile safety controls”, during which travellers are pulled aside. These controls that are based on one-sided suspicions are meant to battle illegal immigration, human trafficking and identity theft.

A Marechaussee spokesman insisted that this is not ethnic profiling, “because ethnicity alone would never be enough reason to stop anyone.” He said: “Ethnicity is only one of the characteristics in our risk profiles. Someone with a passport from an American nation whose suit is too big could fit our profile; if we know that there is turmoil in that part of Africa, then we consider that this person might be traveling on a false passport with which he is traveling like a businessman while trying to escape his country. If he is also nervous, then we might pull someone like that out of the line, yes.”

In response to questions in the Second Chamber of the Dutch Parliament, Defence Minister Ank Bijleveld and then-Secretary of State Mark Harbers (VVD) also said in 2018 that “appearance, including ethnicity may be part of the risk profiles.”

The Dutch state is thus named as a defendant in the court case because it “does not protect civilians against [this type of – Ed.] discrimination.”

Amnesty: “The Minister of Defence and the Secretary of State in charge of Justice and Safety are responsible for border controls carried out by the Royal Marechaussee. They believe that ethnicity and other personal characteristics should be criteria during border controls … and as such they allow the Marechaussee to discriminate. That is harmful to civilians that fall victim, it contributes to stigmatisation of ethnic minorities and it tarnishes people’s confidence in government.”

The court case also charges that “it also has never been proven that ethnic profiling is effective in battling crime.” Said attorney Merel Hendrickx of the Public Interest Litigation Project: “If you pull people out of the line at random, you miss people whom you should be stopping because of that feeling in your underbelly. You might not be paying attention to those who do not fit your standard risk profile, but meanwhile are still traveling with false documents.”

One of those people whom the Marechaussee officers found to fit the profile is former Eindhoven city councilman Mpanzu Bamenga of the D66 party. Bamenga, who previously also worked as policy officer for University of Leiden, was traveling back to the Netherlands from Italy, where he had given a speech on Liberation Day, when he was pulled out of the line at Eindhoven Airport on April 30, 2018.

“At first I thought there was something wrong; maybe they were looking for someone who looked like me,” he recalled in an interview with journalists. It turned out that he and other dark-skinned travellers were pulled out because of their skin colour.

He is one of the two civilians who joined Amnesty International in the court case against the Dutch state. He said that he had been furious when it happened and had made a public fuss, which eventually led to parliamentary questions. He subsequently filed a complaint from which came a hearing. “The officers in question admitted that ethnicity had been part of the reason why they stopped me, together with other characteristics.”

These characteristics – a non-Dutch appearance, walking fast and dressed neatly – made the travellers suspected Nigerian money-traffickers.

Bamenga was born in the Democratic Republic of the Congo and raised in the Netherlands. “I asked them how you profile someone for their non-Dutch appearance. What does a specific Dutch person look like, [because] I am Dutch too. They could not come up with a solution for these types of structural problems, which is why we are taking them to court now.”

He did not think dropping ethnicity as a factor during immigration controls would lessen the Marechaussee’s effectiveness.

“It has never been proven to be effective. But honestly, that is not even a consideration for me. … This is about a hidden form of discrimination. And especially government has a duty to protect its civilians against this type of injustice.

“I have had a good education and I have a good job, so I will get over this. But what about the intern who cannot find a job because of his last name? He is vulnerable and drifts away from society because of these experiences. It is because I know how to speak up for myself that I feel that I have to do something about this – for everybody.”