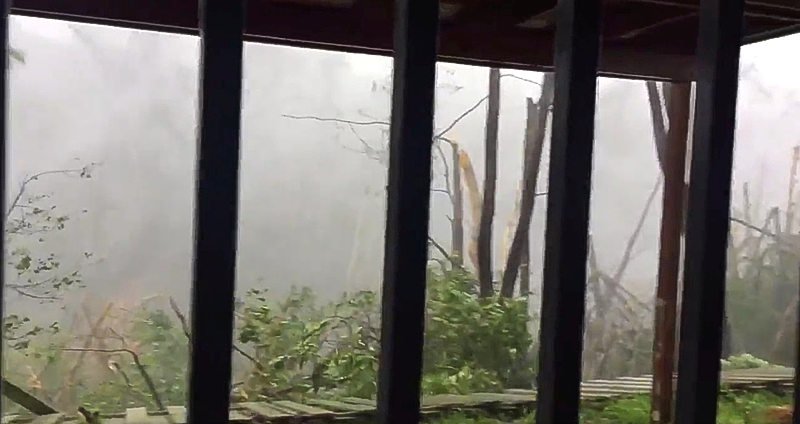 SAN JUAN, Puerto Rico–Hurricane Maria slammed into Puerto Rico on Wednesday as the strongest storm to hit the U.S. territory in nearly 90 years, downing power to most of the island, flooding some areas and ripping windows out in the capital, San Juan.

Maria, the second major hurricane to roar through the Caribbean this month, made landfall near Yabucoa, on the southwest of the island of 3.4 million people. Thousands of people were seeking safety in shelters.

Broken windows, mangled awnings and gutters dangled haphazardly from buildings in San Juan or were ripped off entirely. Toilets bubbled noisily and belched foul air as the hurricane rumbled through the city’s water and sewage lines. Up to 90 percent of the island was without electricity, El Nuevo Dia newspaper quoted Governor Ricardo Rossello as saying.

Maria killed at least two people in the French territory of Guadeloupe as it barreled through the Caribbean. It devastated the tiny island nation of Dominica and caused widespread damage on St. Croix, one of the U.S. Virgin Islands.

Hurricane Irma, which ranked as one of the most powerful Atlantic storms on record, also left a trail of destruction in several Caribbean islands and Florida this month, killing at least 84 people in the Caribbean and the U.S. mainland. “God is with us; we are stronger than any hurricane,” Rossello said in a Twitter message on Wednesday. “Together we will rise again.”

Maria was expected to dump as much as 25 inches (66 cm) of rain on parts of Puerto Rico, the NHC said. Storm surges, when hurricanes push ocean water dangerously over normal levels, could be up to 9 feet (2.7 meters.) The heavy rainfall could cause life-threatening flash floods and mudslides, it added.

“This a catastrophe we’re going through,” said Madeline Morales, 62, a saleswoman in San Juan who abandoned her coastal home before the storm hit to seek refuge in a hotel on higher ground.

Maria was set to be the strongest hurricane to hit Puerto Rico since 1928, when the San Felipe Segundo hurricane slammed the island and killed about 300 people, the National Weather Service said.

Before hitting Puerto Rico, Maria ripped off roofs and downed trees as it passed west of St. Croix, home to about half of the U.S. Virgin Islands’ 103,000 residents, as a rare Category 5 storm, the top of the five-step Saffir-Simpson scale.

Some 65 to 70 percent of the buildings on St. Croix were damaged by the storm, said Holland Redfield, who served six terms in the U.S. Virgin Islands senate. “There were a lot of homes that had lost their roofs. It was a sad sight,” Redfield said in a phone interview, describing viewing the island. “I’m in a very densely populated area now and I see a tremendous amount of confusion. A lot of trees are down.”

In Guadeloupe, at least two people were killed, according to France’s minister for overseas territories. Many roads were blocked and some 80,000 people, or 40 percent of the population, were without power, the overseas territories ministry said in a statement. In the largest city, Point-a-Pitre, there was flooding of more than three feet (a meter) in parts of the city, access to the port was blocked and a hospital was damaged, it said.

Maria was on a track to pass just north of the northeast coast of the Dominican Republic on Wednesday night and Thursday, the NHC said. So far, it did not look likely to threaten the continental United States.

“Irma was nothing compared to this,” said Juan Pablo Alvarez, a 61 year old retiree in San Juan. “This is going to do a lot of damage.”

Even though Irma grazed north of Puerto Rico and did not hit the island directly, it knocked out power for 70 percent of the island, and killed at least three people. Puerto Rico is grappling with the largest municipal debt crisis in U.S. history, with both its government and the public utility having filed for bankruptcy protection amid disputes with creditors.

There were hurricane warnings and watches in effect for the U.S. and British Virgin Islands, Puerto Rico, Culebra, and Vieques, the Turks and Caicos Islands, the southeastern Bahamas and the Dominican Republic from Cabo Engano to Puerto Plata.