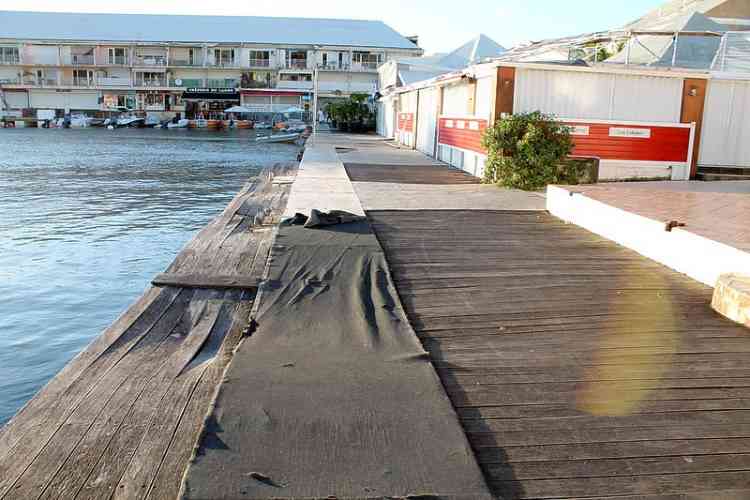 Reconstruction and repair work still have not started on the marina a year and a half after the hurricanes of 2017. (Robert Luckock photo).

MARIGOT–Businesses in the Marina Port La Royale, Marigot, are resigning themselves to another lost season, some two years after the hurricanes of 2017 and have expressed their frustration, particularly about the drug addicts in the car park on the St. James side, in an open letter to the Collectivité and Préfecture.

The car park situation has existed for years and never been resolved by the Collectivité despite the best efforts and suggestions from the district council responsible for the area and the restaurants association of the marina.

President of the Merchants Association of Marigot Yann Le Cam says he understands repair work and reconstruction is budgeted for the marina, but he sees nothing happening. He fears that businesses that took a gamble to reinvest in the marina, hoping for a resurgence of activity, may leave.

Currently, only a handful of businesses are operating in the marina. The Collectivité indicates materials for repair work have been “delayed”, but insists work is about to start. One of the priorities is to replace the unsafe wooden decking that goes around part of the marina.

“For some time, new arrivals in the crack house parking lot have been causing very aggressive behaviour with unacceptable verbal abuse,” the letter from the Merchants Association stated. “Every day, we are forced to suffer the result of a total lack of respect before we can open our shops; excrement, alcohol bottles, condoms, damage to equipment etc… Some establishment owners have even had to call in the police because of the violence of these people which is out of control. Recently, we have noticed that these same individuals are now armed with knives.

“We are being held hostage by drug addicts who take possession of the Marina without any intervention from elected officials or security officials. This ‘crack’ parking lot is well known to everyone and has been for years. Even the Red Cross comes to their aid every week, an intervention that although human only legitimizes their sense of ownership of the territory.

“We ask, what image do authorities want to convey to everybody? Drug addicts who smoke in front of tourists, who solicit in the same parking lot for a fix or entrepreneurs who try to keep the local economy alive? How can all this be happening?

“We understand a certain flexibility in the law, but enough is enough. We refuse to continue to live with this situation of insecurity on a daily basis. The authorities close their eyes. So, should we wait for an altercation that goes wrong to intervene? The law is clear, drug use is strictly prohibited on the public road, so what are you waiting for?

“Are we in a lawless neighbourhood where priority is given to violence, drugs, unsanitary conditions and human decay? Every day we fight to revive this Marina, if nothing is done to put an end to this situation, we cannot be blamed for believing that you support this delinquency. By this letter, we ask to be received as soon as possible by the Préfecture of St. Martin.”