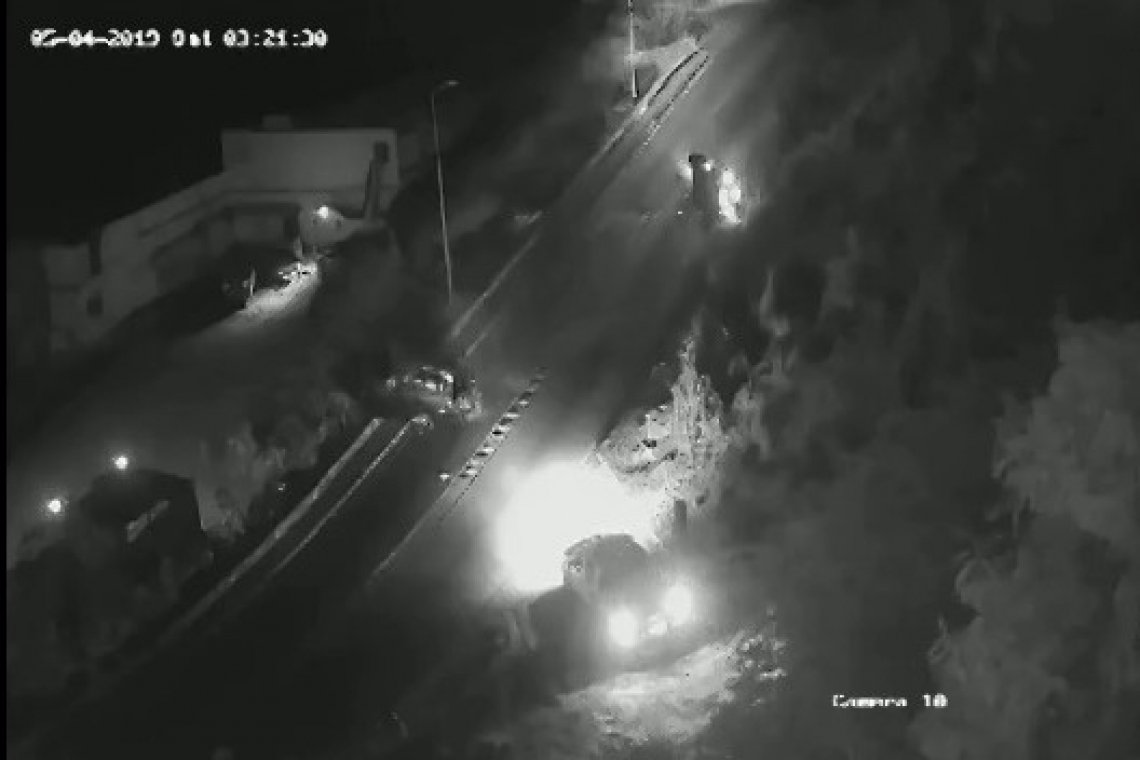 Moment of the accident taken from surveillance camera video footage. The marine’s car is on the left and the victim’s on the right.

UTRECHT–Arnout O., the Dutch marine who caused a severe accident on St. Maarten’s Little Bay Road in May 2019, causing multiple injuries to Patricia “Patsy” Lynch (59), will be prosecuted for causing a traffic accident with severe bodily harm as a result.

Lynch’s lawyer in the Netherlands, victim and criminal defence specialist mr. Nigel Coffi said he had been informed that the suspect, who was repatriated to the Netherlands after the accident, would be summoned to appear before the military courts in Arnhem, possibly before the end of this year. O. will now be prosecuted for committing a crime based on Article 6 of the Dutch road traffic law on causing a traffic accident with severe bodily harm through guilt. He now runs the risk of receiving a maximum prison sentence of 4.5 years, if the court finds it proven that the suspect was guilty of reckless and drunk driving.

Initially, the Prosecutor’s Office in the Netherlands planned to subpoena the suspect for drunk driving, which involves a much lower punishment of a maximum of three months in prison. O. is suspected of driving under the influence of alcohol.

The Daily Herald understood that tests showed that he had consumed an amount of alcohol that was well over the legally allowed maximum. O. has been sentenced before for drunk driving. Being a recidivist, this may result in a higher sentencing by the court.

Lawyer Coffi and his client are very satisfied with the decision of the Prosecutor’s Office to indict the suspect for causing a traffic accident with severe bodily harm through guilt liability, which is a crime. “The subpoena has now been scaled up to the right proportion. With this decision, justice is being done, in my opinion, to the nature of the case,” he told this newspaper.

The victim Lynch suffered multiple injuries as a result of the accident, which landed her car on its side, with her trapped inside. She suffered considerable extravasation in her chest and severe whiplash, which resulted her being unable to work for two months after the accident, a score of treatments and rehabilitation.

To this day, she experiences restrictions in her daily life and it is not sure whether she will ever fully recover. Lynch is seeking damages, material and immaterial, from the suspect. Her civil claim will be part of the criminal proceedings, which is not uncommon. “During the case, my client will join as a disadvantaged party and I will seek damages on her behalf,” Coffi said.

The accident happened on May 4, 2019, on Little Bay Road, at the corner near Sonesta Great Bay Beach Resort. Aruba-born Lynch was driving home after attending an event in the Festival Village as part of the Carnival programme when her car was hit by the suspect’s vehicle at 3:21am.

Surveillance camera footage shows the car of the off-duty soldier swerving to the centre of the road, probably in an attempt to slow down. The suspect, who can be seen driving too fast, lost control of the vehicle and slammed into the left front corner of Lynch’s car, which turned over to the right and remained that way, leaving the victim trapped inside and having to be rescued.

O.’s vehicle spun around its axle twice, ended up on the crash barrier, overturned and landed on its four wheels on the road. He misbehaved badly when St. Maarten police arrived. He yelled, resisted arrest, tried to walk away and even lowered his pants in front of the officers. To this day, he has not shown remorse or apologised to the victim.

The video of this accident was placed on social media and caused much commotion in St. Maarten. O. was arrested and repatriated to the Netherlands and the case initially investigated in St. Maarten. Later the case was referred to the Netherlands, at which stage the victim’s lawyer Coffi became actively involved. He provided the surveillance footage to the prosecution and advocated justice for his client.

In a reaction provided to this newspaper, the Royal Netherlands Navy stated that it was very strict on misconduct while on duty, but also off-duty. The accident in this case happened off-duty, in the suspect’s free time, but incidents like this have an adverse effect on Defence’s image.

“Driving under the influence is strictly forbidden and in an incident such as this one, it is policy to repatriate the person involved so that he/she can be sentenced by the military courts in Arnhem to the full extent,” explained Legal Affairs Staff Officer of the Commander of the Naval Forces in the Caribbean CZMCARIB in Curaçao LTZ1 mr. F.J. Marchal.

In cases such as this one, the victim can have his/her case added to the criminal proceedings as the injured party. That happened in this particular case, but unfortunately the case has been taking quite some time, noted Marchal. “From our side, we will try to provide more clarity on the procedure.”  During a visit to Curaçao, Defence clarified the procedure to Lynch. The meeting was appreciated by both Defence and the victim.