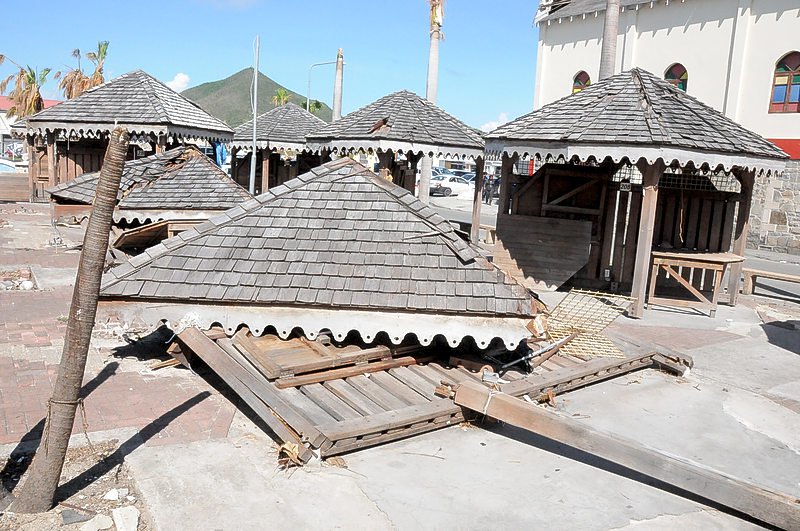 ~ TEATT orders break down of all kiosks ~

PHILIPSBURG–A number of marketplace vendors are up in arms about the move by Minister of Tourism, Economic Affairs, Transportation and Telecommunication (TEATT) Minister Mellissa Arrindell-Doncher to break down and remove all kiosks in Philipsburg because of the unsafe and deplorable condition of the structures following the passing of Hurricane Irma on September 6. Contractors started breaking down the stalls early Thursday.
Ingrid Grell has been a vendor in Philipsburg for 17 years and she is shocked by Arrindell’s sudden move. “The Minister is not correct with her press release that there are rodents around the booths. We sell clothes and if there was a rat issue, we would have known. Maybe there are rats at the Government Building, but not at the marketplace,” said Grell in an invited comment.
Vendors were present at the marketplace on Thursday while contractors were executing work ordered by Doncher. Minister of Public Health Emil Lee, while coming from Parliament house located close to the marketplace, was stopped by the venders who expressed their shock at the move.
Lee tried to intervene. He called Public Works and the Minister’s office for clarity about the move and told the contractor to stop the demolition. Venders thanked Lee and Members of Parliament Rodolphe Samuel and Romeo Pantophlet, whom they also stopped. However, contractors returned to the location two hours later and removed the kiosks, as Minister Doncher had told them to carry out the works.
Head of Public Works Claudius Buncamper was irritated by queries from The Daily Herald about the incident. “The Minister issued a statement on Wednesday night. This is not a surprise. The contractors have instructions and they have to follow it,” stated Buncamper.
“I have never seen this Minister,” stated Grell. “She could have contacted all vendors and informed them of her plans. Besides being Minister of Economic Affairs you are the Minister of Tourism. How can you just knock down all of the booths and lie and say it’s because it’s unsafe and because of rodents?
“These Ministers forget that they are there to serve the people and not themselves. There were only three booths that were damaged by the hurricane. There are 22 booths. Now tell me, how are you going just take down the entire marketplace? We have to make a living too. I have a permit from the Economic Affairs Department. So, what do I do now?”
According to the vendor, Economic Controller Martin Wilson came to the location several times and told the vendors that Government would repair and rebuild the three damaged booths. Much to Grell’s surprise, when contractors started to take down booths on Thursday and she contacted the Economic Affairs Department, they told her they were not aware of any demolition order and could not assist her further.
“I know that they had bigger plans and wanted to take us out long time, but to use excuses that the booths are in bad shape and every booth took severe damage from the hurricane is misleading by the Minister. When cruise passengers get here, what do they meet when they arrive? This Minister knows that they will not have us at a new location by November 11. Who is she fooling?
“We had a major hurricane just over a month ago, The Minister could have come talk to us, instead of vendors finding out in the newspaper that their livelihood is being destroyed just in a day. The hurricane was a blow to us, but the Minister gave us an even bigger one,” said the long-time vendor.
The kiosks behind the Courthouse, next to the old fire station building and across from RBC Bank are in the process of being removed. The contractor felt sorry for the vendors and decided to work around the two vendor booths, but ultimately his order stands to tear down the booths.
The TEATT Ministry is discussing a plan for the areas as well relocating of vendors, but in the meantime vendors will just have to stay put.