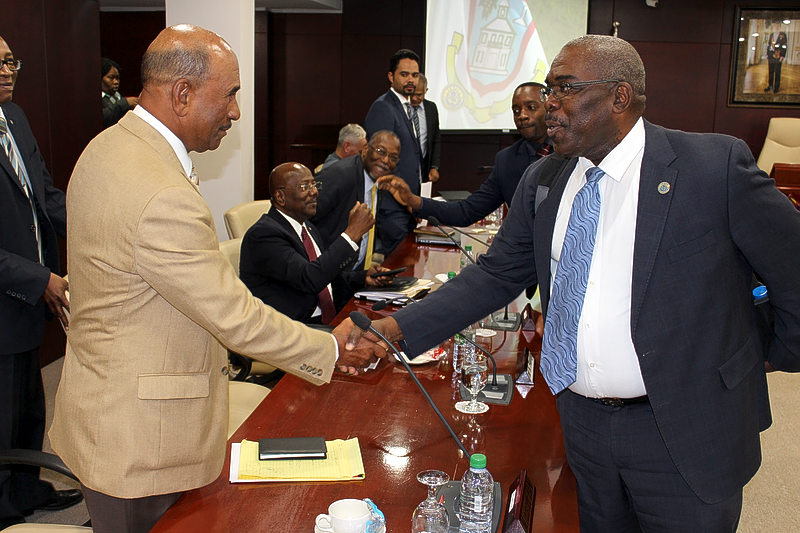 PHILIPSBURG–Government has asked the Legal Affairs Department to start drafting a new Integrity Chamber law, given that the Constitutional Court has deemed the one passed by Parliament some time back unconstitutional and an infringement on the human rights of citizens.

However, Prime Minister William Marlin favours abandoning the issue altogether and instead focussing on strengthening the existing system of checks and balances in the country and making changes to existing laws to prevent integrity breaches. He said considering the stage where St. Maarten is at the moment and considering the ruling of the Constitutional Court on the Integrity Chamber law, this is the direction he believes St. Maarten should take.

Marlin has been communicating his sentiments to other members of the Council of Ministers and this is the direction Government is considering. Marlin shared his views on the subject during a public plenary session of Parliament on Thursday on the sudden appointment of a quartermaster by the Dutch Government.

“Government is right now on track … in terms of we will draft something brand new, but the Prime Minister is busy advising the Council of Ministers that maybe we should walk away from that part of the protocol and agree that there is no longer a need to go through with the Integrity Chamber, but to focus on all that we already have in place,” Marlin told the Members of Parliament (MPs).

One system of checks and balances already in place is the General Audit Chamber, which Marlin stressed already has access to government’s operations and has reported to Parliament on integrity matters in the past. “This is how we have to police ourselves and not import others to police us,” he said.

He also alluded to the Prosecutor’s Office, which he said had been declared Person of the Year, judging from the volume of work it has been doing. “This means that they are finally doing a good job. We have been able to balance the budget and have a surplus. Now we can continue working on certain things and with making funds available to the General Audit Chamber, we can strengthen them so they can have an extra arm to do integrity investigation. Then we would be on a better track,” Marlin told MPs.

He said also that part of the whole trajectory is to review existing legislation and see where loopholes can be closed. St. Maarten has had support from the Central Bank that paid for legal advice examining what needed to change. “If you do this you will be closing the loopholes,” he said. Marlin said these maters needed to be “translated into action” and brought to Parliament.

Regarding the appointment of former Royal Marechaussees Commander Hans Leijtens as the Dutch quartermaster of the Integrity Chamber, Marlin said the Dutch Government had missed the deadline to appoint their quartermaster by almost two years.

Marlin said St. Maarten had lived up to its end of the agreement by appointing Richard Begina from Curaçao as its quartermaster on February 3, 2015, when Governor Eugene Holiday signed off on his appointment and on February 6, 2015, when former Prime Minister Marcel Gumbs also signed off on it.

St. Maarten’s quartermaster completed his work by drafting a protocol, with the Dutch Government giving its input “though the back door.” A law was drafted based on Begina’s final report and that law was subsequently tabled and passed in the Parliament of St. Maarten, but was shot down once it reached the Constitutional Court, which deemed it unconstitutional.

Both Marlin and Finance Minister Richard Gibson, who were both present in Parliament along with Justice Minister Rafael Boasman, said St. Maarten had complied with its end of the agreement.

Marlin said the Dutch Government could not all of a sudden almost two years after the deadline had passed appoint its quartermaster for an Integrity Chamber that was already established and shot down. The quartermaster is authorised to report integrity breaches and have them investigated, and has the authority to begin operating as the director of the Integrity Chamber.

Marlin said also that the Dutch Government conveniently had not appointed its quartermaster by the deadline, but still used a “back door” through its civil servants to give its input into the law, which he said was in itself a breach of protocol.

He said also that to date, St. Maarten had not received any form of communication from the Dutch Government regarding Leijtens’ appointment.

According to Marlin, the signing of the protocol for the establishment of the Chamber, came at a particular juncture in St. Maarten, but he noted that while there are integrity issues, the country is now in a better position and should use its own system of checks and balances.

“We [St. Maarten – Ed.] have enough institutions: we have the Prosecutors Office, which is understaffed and if properly staffed will do work better; we have the police, which is understaffed and if they get the necessary support, equipment and more personnel will help in combating crime. We did not have sufficient Immigration; if we had sufficient, border controls would also be beefed up. … We don’t need to criminalise our entire society [with an integrity chamber – Ed.].”

Gibson echoed sentiments expressed by Marlin, noting that St. Maarten had appointed its quartermaster and Holland had defaulted. “You can’t wait two years after and say now I am doing it,” he said.

He said also that circumstances had changed since the agreement was signed. Under normal circumstances, he noted, probable cause is needed to start an investigation. An investigation cannot begin “out of the blue,” which it is believed can occur under the Integrity Chamber. Gibson said he was shocked that Parliament even passed the Integrity Chamber law which the Constitutional Court says will trample on the rights of citizens, but noted that he understands that MPs acted under “duress,” given statements made that St. Maarten would face an instruction if the law were not passed.

However, he noted that Parliament should never act under duress and pass laws that trample on the rights of citizens, as this is something that they have sworn to protect. “But if you did something wrong, you have a right to change it today because you are Parliament and as Parliament you need to do so,” Gibson said.

Thursday’s meeting opened with a number of MPs speaking on the issue and posing questions to the Ministers present. Most MPs seemed to be on the same page on the issue, and some of them, amongst other things, questioned the Dutch Government’s motive for appointing a quartermaster at this time.

Chairperson of Parliament Sarah Wescot-Williams adjourned the meeting after the first round and said it will resume on Monday.