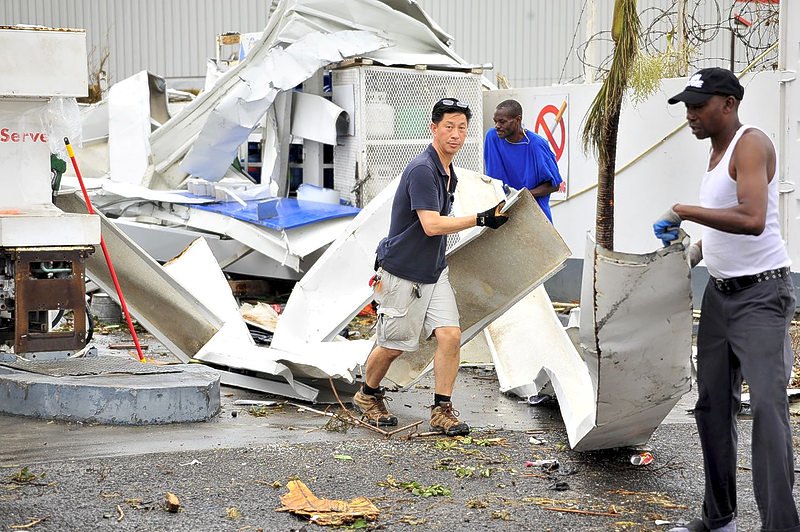 PHILIPSBURG–Prime Minister William Marlin on Wednesday accused Social Affairs Minister Emil Lee of “deliberately withholding” the delivery of relief goods from the people in an attempt to make the Government and Prime Minister look bad to justify a change in Government.

Similar statements were made by United St. Maarten Party (US Party) leader Member of Parliament (MP) Frans Richardson, who called Lee a failure in his position.
Lee countered Marlin’s accusations in a press release Wednesday evening, calling them “false and irresponsible.”
Marlin said there were containers of food and tarpaulins that were not being distributed to the community. He said perhaps the plan is to wait until the new coalition of eight takes office and then distribute the relief items. He said also that when he had suggested that Lee come with a proposal and make a public announcement that persons could visit the Government Building to register for aid, Lee had said sufficient persons were going to the building on their own.
Marlin said it was important for the public to be aware that they can visit the building to register for aid. He said Lee needs to put a criterion in place and based on this criterion people would qualify, but the public needs to know. Marlin said Lee’s inaction was a “clear obstruction” to delay the delivery of aid to the public “so that the Prime Minister can take the heat.”
Marlin had said at a press conference on Monday that after Irma, Government had approved funds to assist persons in the community to help fix their roofs and to help those who need assistance. He mentioned the amounts of NAf. 1.5 million and NAf. 174,000. Marlin said it needed to be clearly defined who will get help and how the aid will be disbursed, and these decisions have to be made by the responsible Minister, the Minister of Social Affairs.
Lee denounced the accusations in his response. “It is really sad that the Prime Minister would sink so low to try and blame the entire Ministry of VSA [Public Health, Social Development and Labour – Ed.] with an out-and-out lie. This is clearly a desperate attempt by a seasoned and cynical politician to shift the public’s anger away from himself in order to hold on to his job.
“The PM stuck to his position regarding Dutch conditions on relief aid until his position as PM was at risk. The DP and UP offered to form a national government several weeks ago, but this was never addressed. Now, with a vote of no-confidence looming, he offers to form a national government again, not for the people, but to safeguard his own position as PM,” Lee said in his release.
“It is amazing that at the same time the PM is making his accusations, he sends a letter to the leaders of the UP [United People’s party – Ed.], DP [Democratic Party – Ed.] and US Party suggesting to talk about a national Government. Really? How serious is his intention to form a national Government?” Lee said.
Lee said he had not personally received any relief goods. “All relief goods received by the Ministry of VSA were received by civil servants. These relief goods were distributed by the Ministry VSA, military or volunteers under the supervision of Joy Arnell, the leader of ESF [Emergency Support Function – Ed.] 7.
“To accuse the Minister and by extension the people of the Ministry of preventing delivery of humanitarian aid and relief goods to the needy is to accuse the civil servants and many volunteers of corruption and aiding in a deliberate attempt to deny the people relief for political motives in an attempt to make the PM and this Government look bad. This is clearly false and irresponsible,” Lee said.
He said it would have been inefficient and inappropriate as Minister to take relief goods and hand out relief aid as if they were T-shirts during election campaigns.
“During this time, I have been focused on structurally supporting the Ministry and the longer-term issue of ensuring that money for continued relief and recovery is available. Without substantial financial support, assisting the unemployed, the poor and those without resources to rebuild their homes will be impossible,” Lee noted.

Failure
Richardson said in a separate press release that Lee should be held fully accountable for “his failure to properly organise the relief effort following Hurricane Irma.”
Richardson said the public will soon know the extent of Lee’s failures and his efforts to wash his hands of providing an acceptable and effective relief distribution programme for the people.
“To this day there are containers with water and food not distributed. The Minister of Labour and VSA failed, plain and simple,” Richardson said. “He was responsible for everything: the organising, distribution, vouchers etc.
“It became so disorganised and hectic, the Governor had to step in early on and attend a meeting with Lee and his staff. In this meeting Lee carefully did not make any statements, he deflected all questions to the people under him and washed his hands. He hides under civil servants and lets the civil servants take the blame.”
The MP said the distribution had been so chaotic at times that the Tourism, Economic Affairs Transport and Telecommunications (TEATT) cabinet had to take their own initiative to arrange relief supplies for people in hard-to-reach areas.
“You have to lead. All of this time, where was the Minister? In hiding, washing his hands of his task,” Richardson said.
He said Lee, as a member of the Council of Ministers, had let the public buy into a narrative created by his party leader, creating the impression that the other Ministers were against aid or denied aid.
“I want our people to remember that Emil Lee is a Minister. As part of the Council of Ministers he could easily come out and speak the truth. Did the Council of Ministers make any decision turning down aid from Holland? Did the Council of Minister take any decision not to give aid to the people? In both cases the answer is no.
“But Minister Lee and his party leader would rather people buy into a fake narrative that they created to destabilise Government. He is a failure. And the fact that the relief distribution effort was problematic should be laid entirely at his feet,” Richardson said.