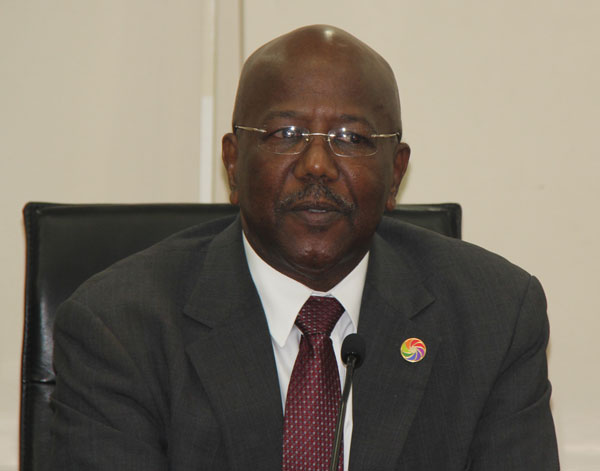 PHILIPSBURG–“It is important to note that although nobody wants to give St. Maarten credit for what it has been able to achieve in the last six years, the facts are that we have literally had to build or create several institutions from scratch, including our own Constitution, which by the way, has certain elements that are unique in the Kingdom such as the Constitutional Court,” said Prime Minister William Marlin in his Constitution Day speech on Monday.

“We have had to build our own Police Department – an effort that is still ongoing – and become responsible for Ministries that were controlled completely from Willemstad, Curaçao before 10-10-10. All of these we have had to do while depending almost exclusively on our own financial resources,” he said.

Six years ago, St. Maarten embarked on a new constitutional journey with the attainment of the status of autonomous country within the Kingdom of the Netherlands. It was a journey that started with the referendum of 2000; a journey that took a whole decade.

“Six years ago, we lowered the flag of the Netherlands Antilles forever, and kept our own flag flying. We had arrived at 10-10-10 full of pride, full of enthusiasm and eager to meet the high expectations of our people.

“Critics of that achievement may point to the fact that those expectations have not been fully met. I cannot, in all honesty, deny that there could be some truth to such criticism. Instability in Government has been the order of the day with the sixth Government in six years in the process of being formed as I speak,” Marlin added.

“‘Integrity’ and ‘ship-jumping’ have entered into our political vocabulary with such negative implications that we have had no less than four integrity investigations conducted, each with its own report, as if integrity – or lack thereof – was a new cancerous growth we needed to study intensively in order to find a cure for it.”

Similarly, the outgoing Government came into existence some 10 months ago with a mandate to institute electoral reform that would curb or eliminate altogether the phenomenon now popularly referred to as “ship-jumping.”

“But while we can emphasise all that we have not been able to get right since 10-10-10, and while some critics of this new status would like to dwell on the imperfections of the system, I am quite sure that none of them, in fact, I know nobody who would want us to return to the pre-10-10-10 days and go back under Curaçao.”

Speaking of the outgoing Government, Marlin said, “We came into Government about 10 months ago, one of our priorities was, of course, to establish a sound financial husbandry. We have done that by balancing the 2016 budget and submitting a balanced 2017 budget on time, a feat that had never been accomplished by any St. Maarten Government before now.”

To effectively address the issue of instability in Government, a new coalition was formed with a comfortable majority of 10 seats in the incoming Parliament that will be sworn in at the end of this month. “This has not been an easy pill to swallow for all the parties concerned, but we put the interest of St. Maarten first and above all political and other considerations,” he said.

“St. Maarten deserves a Government that would sit there for four years uninterruptedly and work in the best interest of the people. That is what I believe we will have with the new coalition, if each party lives up to its obligations.”

“Six years might seem like an eternity to some, but it is no more than a blink in the life of a nation under construction. I acknowledge the fact that many of you would want to see some meaningful change in your lives and fast. After all, that is what you believe you voted for: change. However, change takes time. It also takes consistent hard work and dedication, free from outside influences that may be seeking to derail that same change.”

Marlin added, “I have stated before and I repeat again that I consider 10-10-10 to be a pit-stop in our march towards full sovereignty. We cannot take our eyes off that goal because it is the manifest destiny of all people to be free. Many of the so-called teething problems we have been experiencing under this new constitutional structure come from the fact that we still have to take instructions from authorities that are thousands of miles away and who do not always understand us as a freedom-loving, hard-working, proud people with dignity woven into our DNA.”

Although Government has its role to play, the fact remains that Government cannot do it alone. “Government cannot solve all our problems by decree, neither can Parliament legislate patriotism or love of our neighbour. Each one of us has a responsibility to be more, do more, and give more so that this island could become what we believe it can be: a beacon of hope for the region and beyond,” Marlin said.