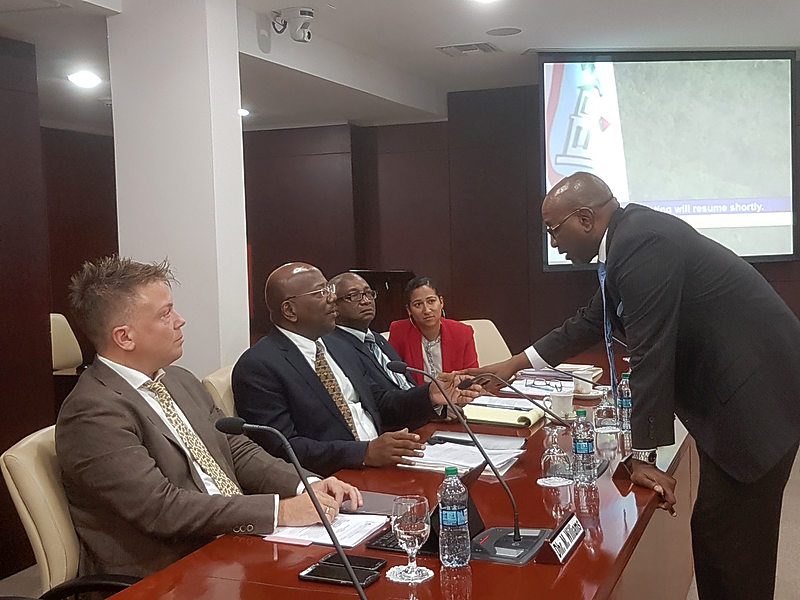 PHILIPSBURG–Oyster Pond has always belonged to the Dutch side and it very much counted as part of the sixteen-square miles comprising the country-within-the-Dutch-Kingdom, Prime Minister William Marlin made clear to Members of Parliament on Wednesday afternoon in a plenary session of the legislature on the border dispute with the French side.

The Prime Minister called for the country not to back down in the face of this infringement. Backing down now could result in more French incursion in the future, he noted. He will return to Parliament today, Thursday, at 2:00pm to continue the discussion on this topic.

He, however, reminded the population: “This is not a fight between the people of St. Maarten [and St. Martin – Ed.] … The fight was started by the French” basically saying “this is mine.”

“A piece of it [St. Maarten – Ed.] has been taken away for a week,” Marlin (National Alliance) said.

French side authorities more than a week ago stormed Captain Oliver’s Restaurant and Marina and arrested the owner under the claim taxes were not paid and that upgrading work on the marina did not have any authorisation from the French side. The business is licensed on the Dutch side and has received permission for the marina works based on the water rights granted by the Dutch side.

Marlin told Members of Parliament (MPs) it has always been so that Oyster Pond is Dutch side territory and this could be proved via the first permission given to the now late Captain Olivier Lange when he opened his business. His land was on the French side, but his marina not. When he requested water rights from the French side, Lange was told he had to go to the Dutch side.

The business, due to the barricading of the barrage to execute the upgrading works, is being “held hostage,” said Marlin.

The French authorities are “muscling in” their way to Oyster Pond, although there is an agreement that the situation there would remain status quo with the waters staying Dutch side territory – until discussions about the sea borders have been concluded.

A response to a strong letter from Marlin to Préfète déléguée Anne Laubies was received on Wednesday. It, however, maintained in spite of the status quo agreement that Oyster Pond is French territory.

Marlin called the infringement an “illegal action” and condemned it as “not the way good neighbours should deal with each other.”

MP Christophe Emmanuel (National Alliance) stated that while he commended Marlin on his stance, he believed it was not bold enough. He called for Marlin to present Parliament with a plan for an immediate solution.

MP Sarah Wescot-William (Democratic Party), who has dealt with similar border issues in her time as Prime Minister, questioned if Marlin has been in touch with President of the Collectivité of St. Martin Aline Hanson as he said he would. Like Emmanuel, she asked about the status of the Franco-Dutch Treaty.

Richardson and MP Tamara Leonard (United People’s party) were both interested in how long it will take to resolve this issue between the French Republic and the Dutch Kingdom and what has been the Dutch response to this latest border situation.

MP Emil Lee asked Marlin if he knew what sparked this latest incident.

MP Silveria Jacobs inquired of fellow MPs if they were willing to take a stance against the action of the French authorities.

Marlin will address these questions when he returns to the legislature this afternoon.

Marlin requested a closed door Central Committee meeting to allow for the sharing of “sensitive information” in a handwritten letter submitted to Parliament just before the meeting. Wescot-Williams queried the request, asking why a public plenary session was called on the topic. Connor said he used his prerogative as chairman to call the session. When the session was called no formal written request was received from Marlin due to a Ransomware computer virus attack crippling the Government’s servers.

Eventually, the point of closing the session was put to a vote. Though the coalition has nine votes to the opposition’s five votes, the session could not be closed. The Rules of Order of Parliament calls for a two-thirds majority for a closure to occur. The coalition was short one vote – that of Marlin, who was present in the session, but in his capacity as Prime Minister and not as an MP.

The transition of the Council of Ministers from the Coalition of Eight to that of the green and white coalition is still pending. This has created a unique situation in Parliament on Wednesday with two Ministers – Jacobs and Lee – occupying their parliament seats. This situation will change when the new Ministers take office.

At the start of his presentation to Parliament, Marlin said the request for a closed session was not to hide or keep secrets, but an attempt at not putting further strain on the relationship with the French side.