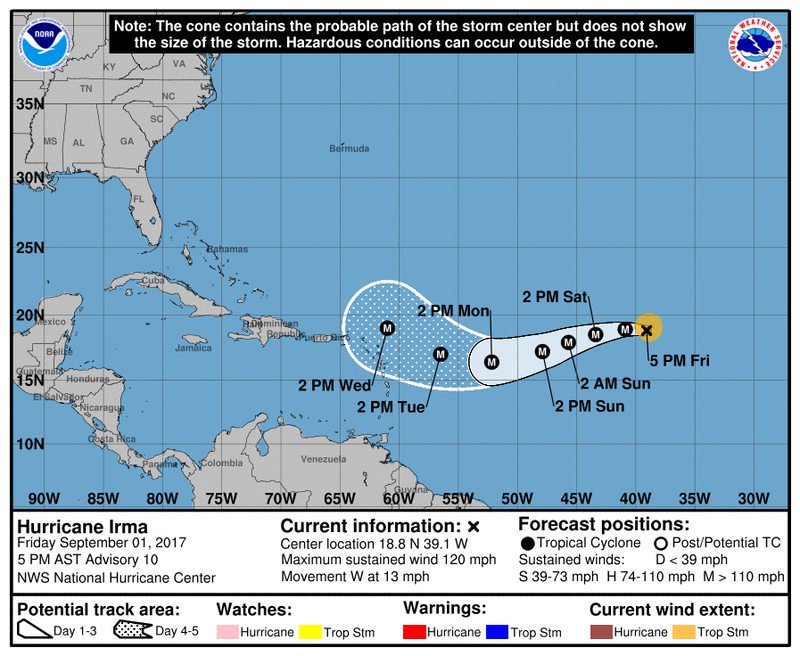 POND ISLAND–Prime Minister William Marlin is taking no chances with Hurricane Irma barrelling across the Atlantic Ocean towards the Caribbean island. He requested additional assistance from the Dutch military on Friday “as a precautionary measure.”

An additional 40 Marines are expected to be deployed shortly, either from the barracks in Curaçao or Aruba by the Dutch Ministry of Defence.
This announcement followed Marlin’s first Emergency Operations Centre EOC meeting that was focused on the country’s preparations in the event Irma poses a direct threat to the country.

A second EOC meeting will be held on Sunday afternoon, following which Marlin is expected to make a statement about the storm-related preparations for Monday.
The Disaster Management Organization continues to closely monitor the progress of Irma and to make preparations in the event the system poses a direct threat. Irma does not pose a direct threat to St. Maarten at present.

However, the Ministry of Public Housing, Spatial Planning, Environment and Infrastructure VROMI has started sinking water levels of the Great Salt Pond to below sea level to increase the pond’s holding capacity and minimize flood risk in the event of heavy rainfall associated with the passing of Irma.

Government is carrying out an assessment of hurricane shelters and the landfill, as well as undertaking other preparations. The goal is for shelters to be available in every district. EOC is working to expand the number of shelters, which are only for use by residents as a last resort. Shelters will only open after a hurricane has passed, and will be open for only 48 hours.

Government urges persons who do not feel safe at home to make preparations to stay with family or friends prior to the storm.
Residents are again urged by Marlin to review hurricane emergency preparedness plans over the weekend.

Marlin, according to an issued press statement, told meeting attendees “it was key to prepare early and not wait until the hurricane was knocking at the door to start preparations.”

In that session were representatives of the Fire Department/Office of Disaster Management, Police, Marines, Meteorological Services, Department of Communication DComm, VROMI, Ministry of Public Health, Social Development and Labour, utilities company GEBE, Director of the Governor’ Cabinet, and the Secretary-General of the Ministry of General Affairs.

As of 5:00pm Friday, Irma was about 1,495 miles (2,405 kilometres) east of the Eastern Caribbean. The hurricane’s centre was located near latitude 18.8 North, longitude 39.1 West. Irma is moving toward the west near 13 mph (20 km/h). A turn toward the west-southwest is expected today, Saturday.

Maximum sustained winds are near 120 miles per hour (195 kilometres per hour) with higher gusts.

Irma is a category 3 hurricane on the Saffir-Simpson Hurricane Wind Scale. Fluctuations in strength, up or down, are possible during the next few days, but Irma is expected to remain a powerful hurricane through the weekend.