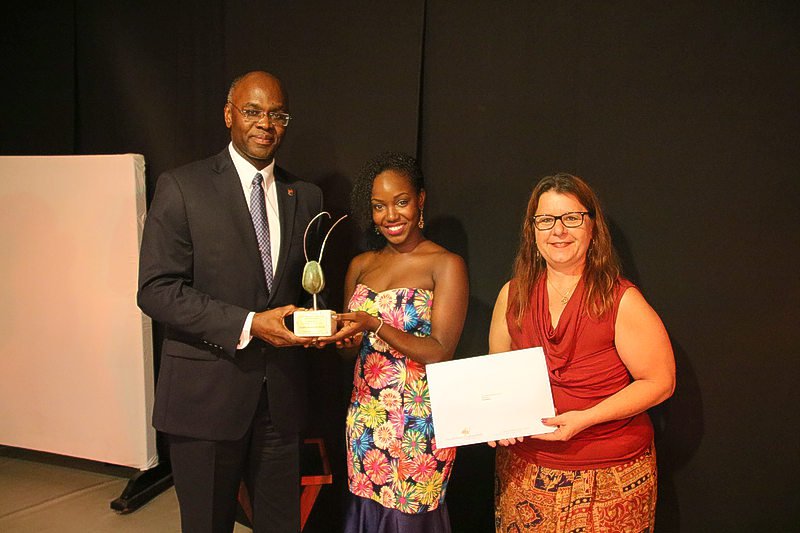 PHILIPSBURG–The Prins Bernhard Culture Fund Caribbean Culture award was given to daughter of the soil Ihndhira Richardson-Marlin for her contributions over the years to the art of dance on the island. Governor Eugene Holiday and proud father Prime Minister William Marlin and his wife were present, among other guests. The event was held at John Larmonie Center.

The Culture Fund was founded in London in 1940 by Prins Bernhard, late grandfather of King Willem-Alexander, to buy war material for the British and Dutch Governments. It continued after the war as Prins Bernhard Cultuurfonds aimed at rebuilding the war-torn cultural life in The Netherlands.

The foundation’s mission is to support cultural, nature and scientific projects in the Kingdom of the Netherlands. The Fund emphasises artistic excellence and educational initiatives.

Richardson-Marlin specialises in ballet and modern jazz, and is Co-Director of Dance Theater St. Maarten. She trained at Motiance Dance School from 1990 to 2003 before leaving to the Netherlands to study the art at Rotterdam Dance Academy from 2006 to 2010 in classical ballet, modern jazz, modern (Graham, Laban, Limon, Cunningham, floor work), improvisation and drama.

This esteemed prize is awarded to persons or organisations that display explicit initiative and efforts for culture and/or nature conservation on the Dutch Caribbean islands Aruba, Bonaire, Curaçao, Saba, St. Eustatius and St. Maarten.

In accepting the prize, Marlin-Richardson thanked her first teacher for encouraging her to continue her dream and joked that if it had been up to her parents she would have been doing something else. She hopes to continue inspiring young talent on the island as she continues to teach tomorrow’s dancers.