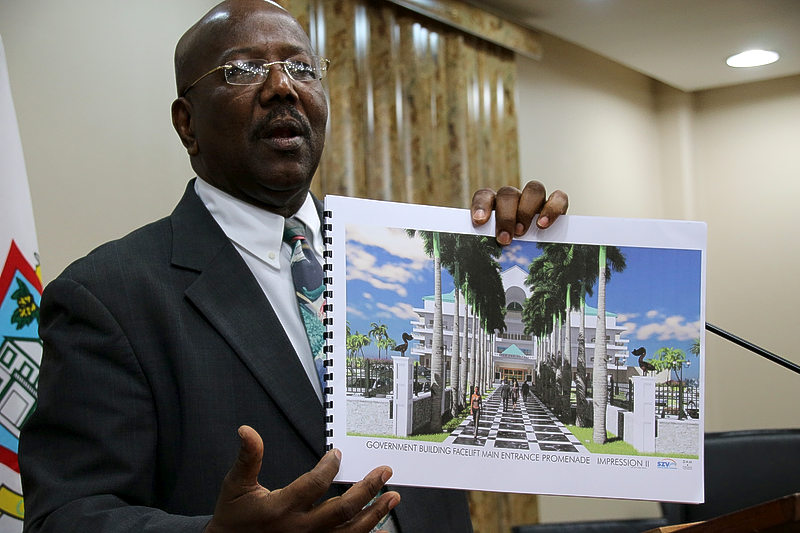 PHILIPSBURG–Prime Minister William Marlin said on Wednesday that work is progressing on the new Government Administration Building on Pond Island.

Marlin, who on Wednesday met with the liaison between Government and Social and Health Insurances SZV on the building, released some preliminary artist’s impressions of what the exterior entrance and the interior entrance of the building will look like. 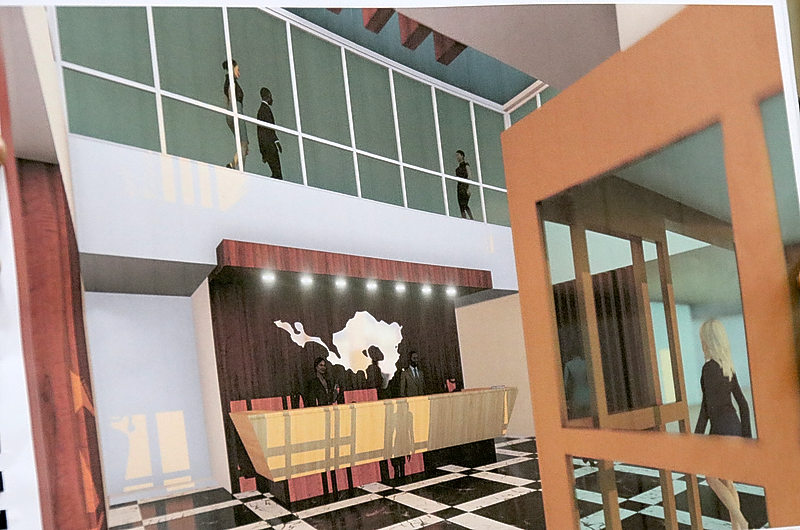 Marlin said the artist’s impressions are works in progress as changes are likely to be made. For example, based on complaints from residents regarding the importation of trees from Florida that are not indigenous to the island, Marlin said, some changes might be made to the architect’s proposal.
He said the proposal on the table is for a mahogany light entrance with a double door, similar to the entrance doors used at Windward Islands Bank (WIB). The reasoning behind using the door is not primarily as a security measure but rather to keep the hot air out of the building. Unlike the doors at WIB, one door will not need to be closed before the other can be opened.
He said too that it is being proposed for either a picture of St. Maarten or the Coat of Arms to be used towards the back of the reception area. These decisions will be finalized “quickly.”
The artist’s impressions that he showed to the media included one of the entrance walkways to the building from the outside. One from inside of the lobby looking out of the building and one of the lobby.
One of the changes to be made at the location is replacing the current barbed wire fence. Also authorities are working with the Nature Foundation to relocate and transplant the mangroves from the pond to accommodate the new fence and parking.
Marlin said persons are working daily at the building to get it ready in time for July, which has been identified as the month that relocation can start. The Council of Ministers and their support staff will be amongst the first to start moving into the building. The Department of Communications (DComm) will be amongst the first set of departments to relocate to the new building to avoid them having to be “running from one office to go to the building” for press matters.