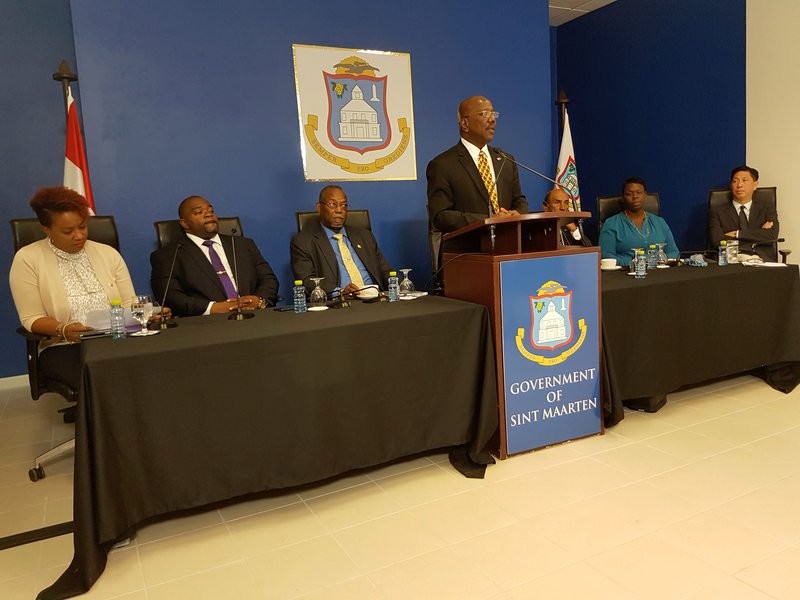 POND ISLAND–Prime Minister William Marlin issued a bold challenge to the Dutch Government on Wednesday when he called on it to “send in the troops” to implement the instruction, when passed by the Kingdom Council of Ministers, for the implementation here of an Integrity Chamber with far-reaching power.

“I will not under any circumstances cooperate with any instruction,” Marlin said. Government is “willing and able to clean up the mess here.”

The Kingdom Council is set to review the draft instruction submitted by outgoing Interior Affairs and Kingdom Relations Minister Roland Plasterk on Friday. Marlin left St. Maarten yesterday afternoon en route to the Netherlands to be present for the meeting, although he believes his presence or addressing the unfairness of the Dutch Government’s action will not help alter the path to imposition of the instruction.

“This goes to show that even though Minister Plasterk is part of a caretaker government, he means, at all cost, he has to strangle St. Maarten with this measure of supervision to implement an Integrity Chamber,” Marlin said at the Council of Ministers press briefing.

The law the Dutch Government seeks to impose on St. Maarten, an autonomous country in the Kingdom, via a kingdom instruction comes in spite of the ruling of the Constitutional Court here sending the law to establish the Chamber to the rubbish bin a year ago. The Court’s main point was the invasion of privacy of residents, the far-reaching powers of the Chamber representatives and the absence of an appeal or challenge process.

The Dutch Government had tried in the past to force the local legal team to adjust the law to put in clauses it wanted, a move that was resisted sternly.

Marlin said of the law the Dutch now want to force on the country: “I will oppose it in the form that the Dutch Government would want to see it.”

The 17-page law has 28 pages of elucidation and was only sent to Government on March 20, giving local administrators just about 2½ weeks to study it. The Council of Advice has rushed a review of the law that may or may not reach Government prior Friday’s session.

The reasoning for the Dutch law is “all old nonsense and junk” aimed at painting St. Maarten “as if it is one cesspool of corruption, the underworld and up-world are in collusion,” Marlin said.

He pointed out that the Netherlands has its share of integrity issues, as seen recently with the arrest of former Member of Parliament and Police Chief Hero Brinkman and the resignation of the Justice Minister due to his alleged collusion with the crime underworld.

“There was no TBO [Anti-Corruption Taskforce – Ed.] team going into his home to take away what may have been proceeds from his connections with the drug lords. No arrest was made. No one picked him up at five o’clock in the morning and questioned him,” Marlin said, drawing a parallel to what has happened here with the arrest of two Members of Parliament by TBO in the past year.