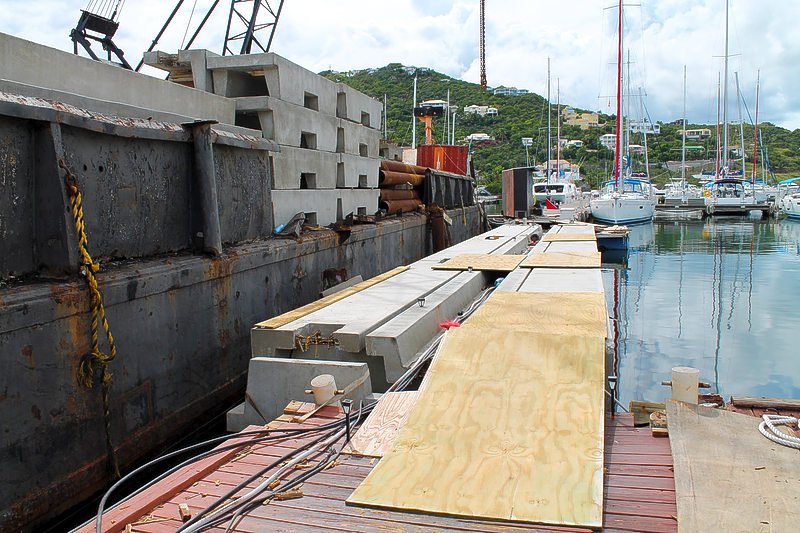 PHILIPSBURG–“We cannot hug up, kiss up, drink champagne and say cheers, when authorities in Marigot, without any consultation, basically annex a portion of territory that they agreed to leave alone until negotiations are finalized and a settlement is reached. Do agreements we have reached in negotiations have no meaning?” said Prime Minister William Marlin in his St. Martin/St. Maarten Day message.

“In view of what is happening today, when the French authorities take unilateral and arbitrary actions, claiming that Oyster Pond North is their territory, despite the fact that we have agreed to let the status quo remain at the quadripartite meeting concerning the demarcation of borders, can we in light of this honestly look each other in the eye today and say we are indeed united? We must be real and accept that the unity we preach especially on St. Martin Day is a farce, at least at the official level,” he said.

“The administrations of both halves of the island live and behave as if we were two separate islands. That is not unity. That is not togetherness. That is what at best can be called living ‘two-gether.’

Of course, I recognize that at the family level, at the people level, we go about our business together as one. This is because, no matter the differences in our official constitutional structures, we are one people.”

Marlin said in his message that he chose to speak “as William, a proud St. Martiner, and member of this ever-expanding, all-embracing St. Martin family … But, unity is not a one day celebration. It is important for us to see this territory, despite its official division into French and Dutch, as one island, with one people, and one destiny as Lino Hughes of Lino and the Hardways famously sang. This must be reflected in every policy decision the authorities on both sides take.”

“Unity,” he added, “is under serious threat with the latest acts of aggression surrounding Captain Oliver’s restaurant at Oyster Pond.”

“We brag about St. Martin being a borderless island, yet we have right now what can be described as a serious ‘border dispute’ triggered by actions that cannot be justified on any grounds … How can we then talk of unity when we don’t even consult each other before taking such drastic actions?”

“… in spite of these developments which I just mentioned, we in the South harbour no bitterness and will never turn our back on our brothers and sisters in the North, regardless of the actions of those who want to continue to divide us and who do not always understand how deep-rooted our bonds are,” Marlin said.

Every November 11, Marlin said wreaths are placed at monuments to remember the fallen in World War I. “Some of our own sons (and perhaps daughters) fought in that War to free the world of tyranny. Maybe, we should also lay another wreath on St. Martin Day to honour our brave ancestors whose blood, sweat and tears laid the foundation for our freedom and unity today. Unfortunately, this cannot happen under the ominous clouds hanging above our heads.”
Looking ahead, Marlin said the local governments should have monthly meetings “starting from now to coordinate policy, to inform each other of the priorities we are pursuing and to synchronize action wherever possible. This is not a new idea, but it is one which we have not executed well enough.”

The two sides should be able to have “national” teams in sports such as football, cricket, baseball, basketball, and tae kwondo. “I am sure we would have much stronger teams that would be able to take on any other teams from the region and beyond,” he said.

“The same thing could happen in culture. A national dance company should bring together talent and groups from both sides of the island. We can already see the results that our young dancers have been achieving in dance competitions in France, for example, through the efforts of the National Institute of Arts NIA.”

Marlin also called for cooperation in education, particularly to improve language learning, environmental issues, putting the electricity companies GEBE and EDF on the same grid, and to coordinate an emergency preparedness plan.

“On a day like this, we are called to renew our faith in ourselves and in the indivisible nature of our cohabitation as one family on this, our beloved island. It is a day on which we should invoke the spirit of jollification to guide us in all our endeavours, because from Freetown to Middle Region, from Reward to the Springs, from St. James to St. Peters and from Lowlands to Guana Bay, this island is our home,” Marlin said.