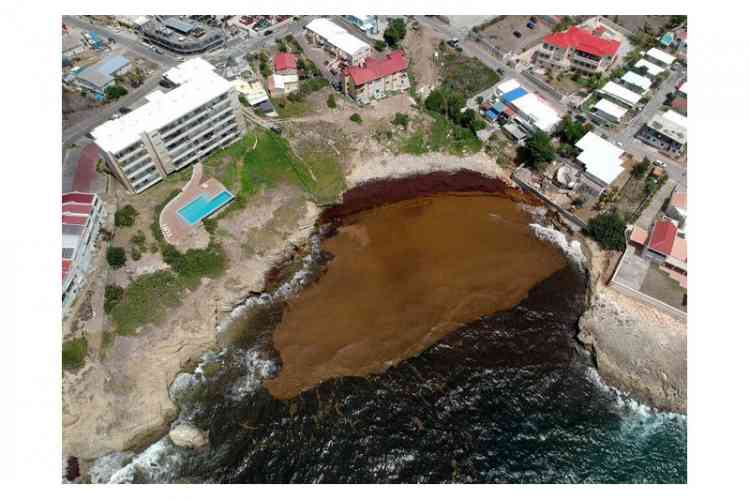 COLE BAY–There is a large influx of Sargassum seaweed currently making landfall on St. Maarten. St. Maarten Nature Foundation is warning the community that the Sargassum impacts, based on satellite imagery and field surveys, started earlier this week and will continue to persist for at least another week.

“We have been coordinating our monitoring efforts with our partners in the region and based on weather predictions, satellite imagery and field surveys large mats of Sargassum are impacting the area,” Nature Foundation Manager Tadzio Bervoets stated.

“We have been working closely with our partners in the region and with local stakeholders … to find a way to control the amount of the weed washing up on beaches in case of a significant influx. In case of an influx we need to find a way to coordinate the removal of the seaweed in order to avoid serious risks to nesting sea turtles and hatchlings, while the algae itself can be a hazard to the animals.”

The foundation is also warning residents of areas that are or will be impacted by Sargassum to take precautions to prevent negative health effects caused by the decomposing seaweed.

“We are advising residents in especially Guana Bay and Pointe Blanche to keep windows and doors closed as much as possible,” said Bervoets.

When the Sargassum lands and starts to decompose, hydrogen-sulphide gas is released, which is a colourless, toxic and highly flammable gas that spreads an unpleasant odour much like the smell of rotten eggs.

“Inhaling the gas in small doses can trigger irritation of the eyes and the respiratory system, especially among people who are sensitive to it. The groups most at risk are people with respiratory problems, asthma patients, elderly people, babies and pregnant women. Certain animals, especially dogs, are also sensitive to the inhalation of hydrogen sulphide,” continued Bervoets.

Sargassum is a genus of brown (class Phaeophyceae) seaweed which is distributed throughout the temperate and tropical oceans of the world.

Sargassum first plagued St. Maarten in 2011 and 2012, with the foundation warning swimmers to avoid certain beaches due to the large amount of Sargassum weed. Many beachfront residences and hotels had to continuously clean washed-up Sargassum.

The Nature Foundation said it would continue to monitor the situation and coordinate with the public sector if and when the removal of Sargassum should occur.