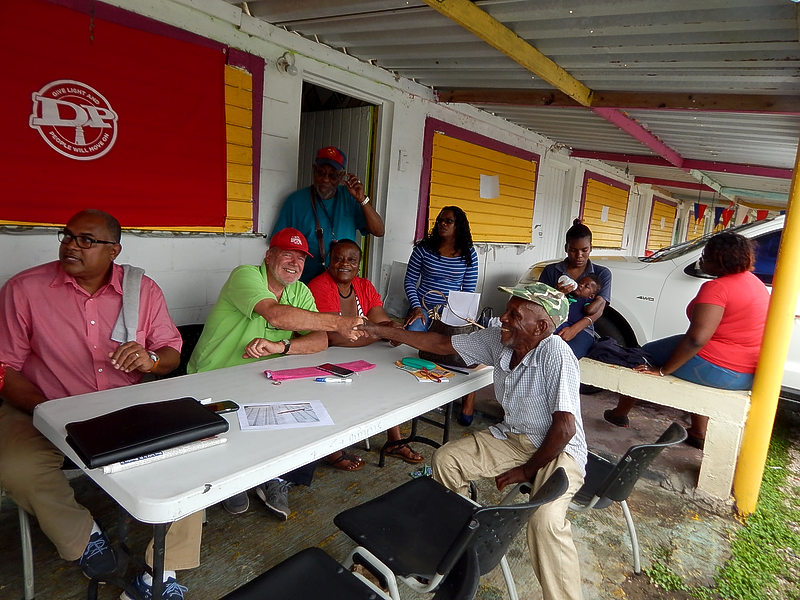 ST. EUSTATIUS–Voters in St. Eustatius voted massively for Island Councilman Koos Sneek of Democratic Party (DP) who was a candidate on the Christian Democrat CDA slate in Wednesday’s election for the Dutch Parliament’s Second Chamber.

Sneek was posted outside the voting bureau at Mike van Putten Youth Centre from 7:30am and said that according to him more people came out to vote for the Second Chamber election compared with 2012.

During a radio broadcast on Tuesday evening, Progressive Labour Party (PLP) called on voters not to vote in the Second Chamber election. The party took to the airwaves because it wanted to send a message to the current Members of the Dutch Parliament concerning its grievances about a number of issues with the current Dutch Government.

Sneek said he was “very proud” that he had the chance to become the first Member of Parliament (MP) to represent Statia in the Second Chamber.

“It is a good first step and I hope that more people from the islands will be able to postulate themselves in the Second Chamber election next time around. The idea is to get more people involved with the election for the national Government, as it is also our national Government. They are representing us as well. Those from the Caribbean Netherlands islands should go out to vote too. It would be good if there are more candidates from the islands, and not just me,” Sneek said.

Members of the voting bureau counting the votes.

Due to Sneek’s candidacy, CDA won the election in Statia by a landslide. Centre-democrat D66 came in second with 27 votes. Green-left GroenLinks at 15 votes, and Article 1 of Dutch TV presenter Sylvana Simons, who is of Suriname origin, captured 14 votes.

A male voter said he had voted for Simons “because she is the first black lady to head a list. Her party represents all of Holland. It has persons from the Caribbean and from Holland, and persons of different faiths and religions.”

Eight votes were cast for Party for Freedom PVV and for Socialist Party (SP). Conservative VVD of Prime Minister Mark Rutte gathered six votes, and coalition partner Labour PvdA five. Christian Union was good for four votes. Three votes were cast for pro-animal party PvdD, and two votes each went to party for seniors 50Plus and Forum for Democracy FvD.

A student from the Netherlands said he had mixed feelings about the election. “I have been on the island for nine months. I am far away from home and hope that good leaders will get into Government. A lot of my friends on the island are not going out to vote. The distance between the Netherlands and Statia makes things very complicated,” he said.