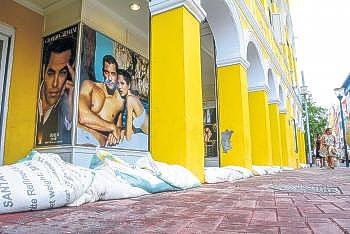 There was more wind than normal, but not of storm force. The so-called “feeder bands” that had prompted the decision to postpone Friday’s election and close government offices as well as schools stayed mostly east and to a lesser extent west of the island.

One did pass over particularly the Banda’bou area and brought up to 40 millimetres of rain in certain locations, accompanied by thunder and lightning Friday afternoon. But the feared prolonged heavy showers that could lead to widespread flooding did not materialise.

Seas became pretty rough due to a southern wind and caused problems mostly along the coast in the western part of Curaçao for example at Santa Cruz. Beaches there were closed to the public as a precaution.

The parliamentary election was moved to next Wednesday. Government took this step based on advice of the Meteorological Service, in consultation with the Supreme Electoral Council. The latter had first met with the 13 political parties on the ballot.

He also warned there would still be a lot of rain in the final part of what is known as “the tail of the hurricane” that could lead to flash-flooding as the ground was already saturated. In fact, the Fire Department on Thursday needed to provide assistance in various areas such as Kirindongo Abou, Saliña, Jongbloed, Nort Sapaté and Marie Pampoen.

Government had given civil servants off Friday “where the service permits” with the exception of emergency personnel and other essential employees, advising businesses to do the same. During a press conference around noon people were told they could go back to work but should keep an eye on the weather.

The large busses of government-owned company ABC did not run and only small private busses were available, but they didn’t have many clients as people had been asked to stay inside and off the roads as much as possible.

St. Elisabeth Hospital sent patients home where medically responsible, while the Advent Hospital and Trupial Inn located at flood-prone Groot Davelaar evacuated all their patients and guests respectively. Waste processor Selikor adjusted its garbage collection schedule and InselAir cancelled all flights, having brought its planes to safety in nearby Valencia, Venezuela.