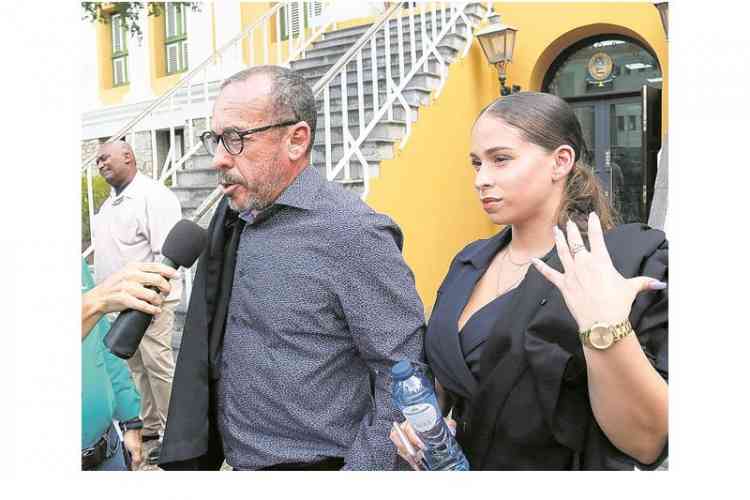 Jamaloodin’s lawyers “Peppie” and Athena Sulvaran, with the late Helmin Wiels’ brother Aubert in the background at left.

WILLEMTAD–Friday’s sentencing of former Curaçao Finance Minister George Jamaloodin to 28 years in prison does not necessarily end the “Maximus” case, as the investigation into who was behind the murder of PS-leader Helmin Magno Wiels is called. The Prosecutor’s Office believes he did not act alone and received money from other financiers to plan the paid assassination.

The motive was probably Wiels’ digging into the lottery business of Curaçao and St. Maarten. Just before he was killed, the then Member of Parliament (MP) accused that sector of running a scam and tax evasion. He then waved a file saying it would incriminate different people if something happened to him.

Jamaloodin’s defence team immediately filed an appeal. They say the evidence is only based on testimony by triggerman Elvis “Monster” Kuwas, who was already sentenced to life in prison for such during the “Magnus” case, an anonymous/threatened witness known as B5, the brother of co-suspect Luigi “Pretu” Florentina who was found dead in his Barber police cell, and employees of Jamlaoodin’s Speedy Security Service, along with SMS message exchanges with Burney “Nini” Fonseca who got 26 years for arranging the murder as intermediary with the hired killers.