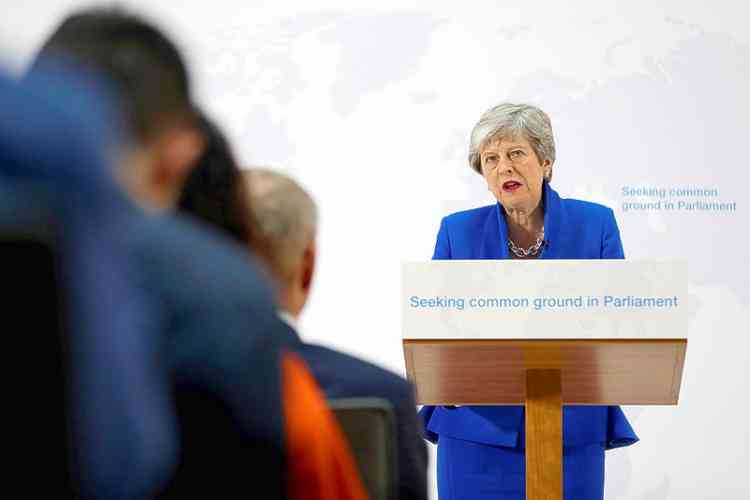 LONDON–Prime Minister Theresa May set out a “new deal” on Tuesday for Britain’s departure from the European Union, offering sweeteners to parliament including the chance to vote on whether to hold a second referendum to try to break the impasse over Brexit.

Three years after Britain voted to leave the EU and almost two months after the planned departure date, May is mounting a last effort to try to get the deeply divided parliament’s backing for a divorce deal and leave office with some kind of legacy. The odds do not look good.
May offered what she called “significant further changes” but many lawmakers, hardened in their positions, have already decided not to vote next month for the Withdrawal Agreement Bill, legislation that implements the terms of Britain’s departure.
Speaking at the headquarters of PricewaterhouseCoopers, May appealed to lawmakers to get behind her deal, offering the prospect of a possible second referendum on the agreement and closer trading arrangements with the EU as incentives. “I say with conviction to every MP or every party: I have compromised, now I ask you to compromise,” she said. “We have been given a clear instruction by the people we are supposed to represent, so help me find a way to honour that instruction, move our country and our politics and build the better future that all of us want to see.”
By offering the possibility of holding a second vote on her deal and a compromise on customs arrangements, May hopes to win over opposition Labour lawmakers, whose votes she needs to overcome resistance in her own Conservative Party. But Labour leader Jeremy Corbyn said his party could not vote for the Withdrawal Bill, describing May’s new offer as “largely a rehash of the government’s position” in talks with the opposition that broke down last week.
The prime minister has also infuriated Brexit-supporting lawmakers, who have described a customs union with the EU as no Brexit at all. Several leading Conservative eurosceptics such as former Brexit minister David Davis and Jacob Rees-Mogg said they would not vote for the bill in early June.
Former foreign minister Boris Johnson and ex Brexit minister Dominic Raab, who are the top two favourite choices among Conservative members to replace May according to an opinion poll published last week, also said they would oppose the deal. And Northern Ireland’s Democratic Unionist Party, which props up May’s government, said the “fatal flaws” of her original deal remained. They fear the divorce deal could see Northern Ireland split from the rest of the United Kingdom.