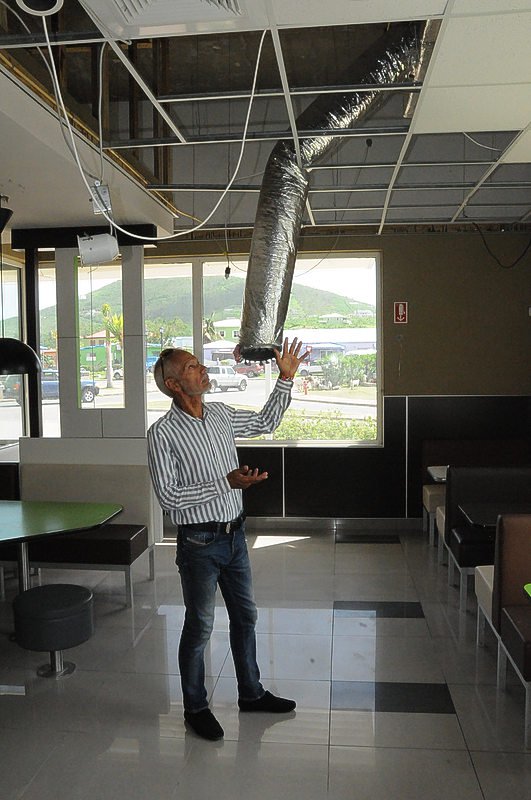 DUTCH QUARTER–After receiving numerous requests for information about the re-opening of McDonald’s locations on the island, management decided to inform their customers that the stores suffered major infrastructure damage during Hurricane Irma on September 6.

The Simpson Bay and Philipsburg McDonald’s locations will be re-opened in early December, while the Belvedere and Marigot locations will open in January.
“We cannot just put a tent outside and start to grill burgers and sell them. McDonald’s corporate will never allow this. We need to use certified equipment that is fully functional,” said St. Maarten McDonald’s franchise owner Michel Lapine on Sunday.
The water and wind of the monster hurricane damaged most of the restaurants’ cooking equipment and machinery, according to the owner. “Cash registers, deep fryers and much more equipment were damaged, thanks to water from Irma. We have to order these machines that are made with specific McDonald’s corporation standards. That takes some time. In six weeks, equipment will get here, then we have to install it and then it has to be certified. This will take time,” said Lapine.
He said his company employs 120 workers and the last thing he wanted to do is terminate anybody’s employment. “We had a big meeting at our Philipsburg branch and I told my staff the truth. I gave options to long-time employees and asked if they wanted severance pay or if they would accept 70 per cent of their salary monthly until we re-open the restaurants,” he stated.
The workers responded positively and stayed on while some on contract were relieved until the re-opening of the business. “I have a good relationship with my employees and I appreciate the work they do for the company,” said Lapine.
Two of the restaurants were victims of looting. This practice set back the re-opening by weeks.
“One of my managers came to check on the Belvedere location and told me that everything was fine. Just a back door was damaged, but everything was fine inside and the location did not get badly damaged. A few hours later, she told me that looters broke into the business and trashed the offices and took a number of computers and cash. The same for our Marigot location,” said Lapine.
“I would like to tell our customers that we will be back in business sooner than you think, just be patient. We want to make sure that we continue to provide you with the same high-quality service we have provided over the years. I also spoke to McDonald’s International and told them that the Latin design of our restaurants in this part of the Caribbean is not realistic for our region. We will be rebuilding as soon as that is settled,” concluded Lapine on Sunday.