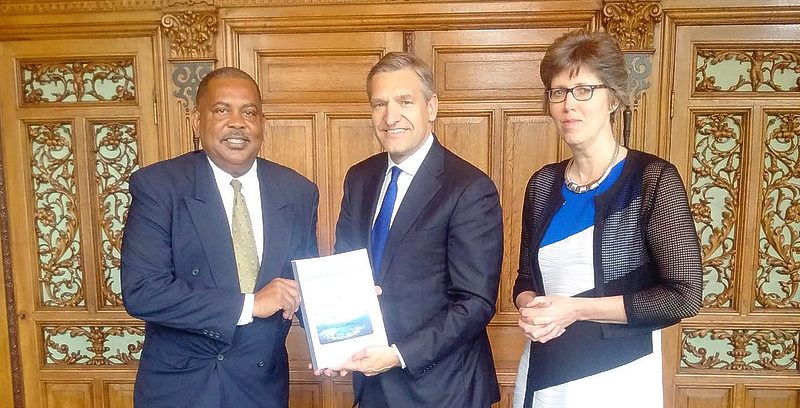 THE HAGUE–The meeting between St. Eustatius Commissioner of Constitutional Affairs Derrick Simmons and caretaker Dutch Minister of Home Affairs and Kingdom Relations Ronald Plasterk on Thursday did not go ahead. Other than that, Simmons was positive about his visit to The Hague this week.

The Minister had invited Simmons for a private meeting on Thursday afternoon. Simmons and his advisor Xavier Blackman went to the Ministry of Home Affairs and Kingdom Relations BZK, but did not get farther than the reception desk for the Commissioner refused to have a one-one-one meeting with Plasterk without Blackman.

“Eventually, we were invited for a meeting on Thursday afternoon. We did go to the Ministry, but I informed them that I had a principle problem with having a private meeting with the Minister in which my advisor was not allowed to be present,” Simmons told The Daily Herald afterwards.

“The Ministry and my government have a trust issue, and I didn’t feel comfortable with a meeting just between the Minister and myself. I wanted a third person, Blackman in this case, to be present so later on it wouldn’t be his word against mine. With everything that has happened and the mistrust as a result thereof, I cannot rely on the Minister as my sole witness and vice-versa,” said Simmons.

The Commissioner explained that at the Ministry Blackman was informed that he would have to remain in the waiting area. “That was unacceptable to me,” stated Simmons. Plasterk had already made clear in a letter that he sent to the Executive Council last Friday, that the Commissioner was most welcome at his Ministry, but not Blackman.

According to the Minister, Blackman could not be part of the delegation visiting his Ministry because the latter’s appointment as Director of Public Affairs and Support had been turned down by Kingdom Government Representative for the Caribbean Netherlands Gilbert Isabella.

The Statia delegation remained steadfast: Blackman would join Simmons on his visit to the Ministry for talks with the Minister, or there would be no meeting. Plasterk waited in vain. “The Minister was ready to receive the Commissioner in his office. The Commissioner was at the Ministry, but at the last moment apparently decided not to see the Minister. We were given no official reason why he didn’t show up. The Minister would have liked to have a talk with the Commissioner about the situation in St. Eustatius,” said Plasterk’s spokesperson.

Simmons said he found the incident “Very unfortunate; we remain willing to talk, but the issue is bigger than me. We are asking for dialogue and for solutions. I am not the only person that should be involved in talks. We need to sit down with everyone involved. This is not about me,” he said.

The Commissioner and his advisor said that they did try to hand over the White Paper, a document of the Statia Government that describes the desire to achieve the status of an autonomous country. “We were told at the reception that someone would come down to get it from us. We waited for 15 minutes but no one came, so we left and went to our next meeting,” said Simmons.

Overall, Simmons found the visit to The Hague to be “very useful.” In the course of this week, the Commissioner and his advisor met with three members of the Second Chamber of the Dutch Parliament: André Bosman of the liberal democratic VVD party, Sybrand van Haersma Buma of Christian Democratic Party CDA and Antje Diertens of the Democratic Party D66, as well as a representative of the 50 Plus party.

“The meetings were positive. We were able to clear up a few issues. For example, the role of the Island Governor and his refusal to sign certain documents. The Island Governor has an important role, but the current system causes problems.

“We also had the opportunity to explain the position of the Statia Government regarding the current public entity status and our desire for more autonomy. The Dutch Government doesn’t take our public entity status seriously. Things are amiss; it was confirmed in several reports. Yet, The Hague doesn’t follow-up on these report,” said Simmons.

The Commissioner said the meetings at the Second Chamber allowed the Statia delegation to exchange information and to meet face-to-face with some Members of Parliament. “We need to share our story. We told them we don’t only want to complain, but we want solutions for this stalemate because the Statia people are suffering as a result. We are in government and we need to govern.”

According to Simmons, the visit to The Hague was a “step in the right direction.” “We still have hope, even though the system is broken. We need to find ways to exist as a country, and we need dialogue for that. We are asking for respect and equality. We need to solve this together in the Kingdom. We have taken the first step,” he said.