Home Local News Members of Electoral College of St. Eustatius were sworn in | THE... 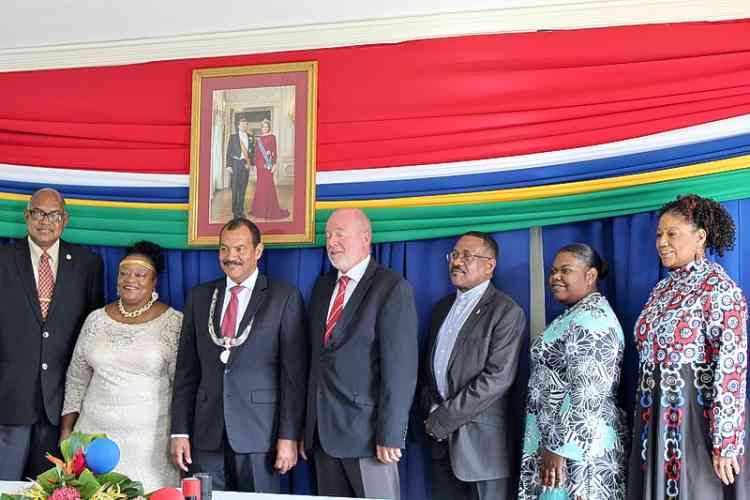 Members of the Democratic Party (DP) Adelka Spanner, Nicolaas “Koos” Sneek, Ernie Simmons, Winston Fleming and Shanna Mercera-Gibbs will be participating in the election of the Dutch Parliament’s First Chamber.

The credentials of the elected members to the Electoral Council were vetted during the meeting. The credentials entail that persons should have Dutch nationality, be a citizen of the public entity of Statia, be at least 18 years old and not excluded from the right to be elected via a court verdict.

It was also verified that none of the five members had a function that was incompatible with membership in the Electoral College.

A committee appointed by Government Commissioner Marcolino “Mike” Franco, which consisted of chairperson Simmons, Spanner and Sneek carried out an investigation to verify that the submitted documents were in order.

Simmons declared that all documents were found to be in order, which meant that all five members were approved to be appointed as members of the Electoral College.

The five members were then installed and took the oath, swearing not to compromise their position and to carry out their function to the best of their ability.

Spanner thanked the 374 voters for coming out. “Your vote counted on Statia being represented in the Electoral College. You put your trust into DP and we will vote for the best representation in the First Chamber.”

She congratulated her colleagues for being the first members of the Electoral College of Statia.

Sneek said it was a “pity” that no other parties than DP had contested the election.

“This is the first time in history that we were able to be elected to the Electoral College that votes for the highest institution in our democratic system, which is the First Chamber, but still, some belittle it.”

Sneek said it had been shown on a Dutch television station how the votes from Bonaire, Statia and Saba can make a difference because the votes on the islands in total represent one-tenth of a seat. “In the past, parties have won an extra seat or lost an extra seat because of this 10 per cent,” Sneek stated.

Simmons said the First and Second Chambers are very important organs in the constitutional structure that make the laws. “I think it is good, especially for young people, to dive into the literature and find out exactly what the Chambers do. I sometimes get the impression that there are those on the payroll of the federal government that do not even know that the First Chamber is the one that passed the budget that is paying them a salary, so little knowledge is out there.”

Fleming said he was “shocked” by the number of voters that had turned out, as “we didn’t even campaign, we spoke every now and then on the radio.”

Mercera-Gibbs, the youngest member of the Electoral Council, thanked God, her family and her fellow party members.

The Electoral College will be participating in the First Chamber election on Monday, May 27.