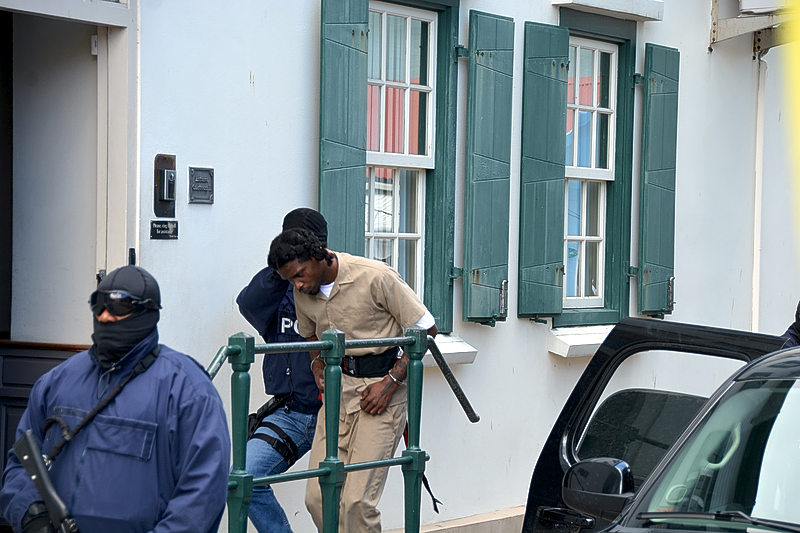 PHILIPSBURG–The Joint Court of Justice on Wednesday afternoon sentenced the two main suspects in the so-called Menam case involving the armed robbery of Oro Diamanté jewellery store in Front Street and the subsequent shooting of Police Officer Gamali Benjamin to prison sentences of 25 and 15 years. A third suspect, who was acquitted by the Court of First Instance, was convicted of being an accessory to the robbery and received four years.

The Court of Appeals found it legally and convincingly proven that the two main suspects Ridge Damisse (25) and Jovanny Leon (21) had robbed the jewellery store on August 5, 2015. Bike Patrol Officer Benjamin had tried to stop the men but was shot down and died. Another Officer, who saw this happen, fired a shot in the direction of the defendants. He was also taken under fire while the two robbers tried to escape on a motorbike.

Damisse, also known under his rapper’s alias “Kilo Gotti,” got injured and could not continue the flight. Leon managed to get away with part of the stolen jewellery. He was apprehended five days later. In the meantime he had sold part of the loot.

Contrary to the Court of First Instance in its verdict of May 4, 2016, the Court of Appeals is of the opinion that both men had not only “consciously and closely” cooperated in the robbery, but also in the following shooting.

According to the Appeals Court, the shooting was an element in the escape. Even prior to committing the robbery it was already clear to both defendants that violence would not be shunned, the Court stated.

Unlike the lesser Court, the Appellate Court considered it proven that the main suspects had obtained information about the targeted jewellery store from a third person. Taxi driver Obed A. Cangieter (35) knew Damisse. More than a week before the robbery he had asked his stepdaughter’s mother to use her mobile phone to make video images of the showcases inside the store. Following the Solicitor General’s recommendation, the accomplice taxi driver was sentenced to four years.

The Court of First Instance had sentenced Damisse to 20 years. During the appeal hearing of February 2 the Prosecutor’s Office called for a life sentence. The Joint Court, however, did not sentence him for life. The Joint Court said it had an eye for the suffering caused to the Police Officer’s relatives but also for the importance of consistent punishments. His crimes were considered “extremely serious,” but the defendant’s return to society should in the Court’s opinion not be ruled out forever.

The Appeals Court was of the opinion that the prison sentence imposed by the Court of First Instance did not do justice to the severity of Damisse’s crimes and his attitude during his trial. Therefore, the Joint Court decided to sentence him to 25 years.

The Joint Court also quashed the initial ruling in Leon’s case. The eight-year prison sentence imposed by the Court of First Instance was increased to 15 years.

Accomplice Mike H. Azor (35), who provided a hammer to Damisse, which was used in the robbery to smash jewellery store showcases with, was sentenced by the Court of First Instance to two years and six months. There was no appeal in his case.