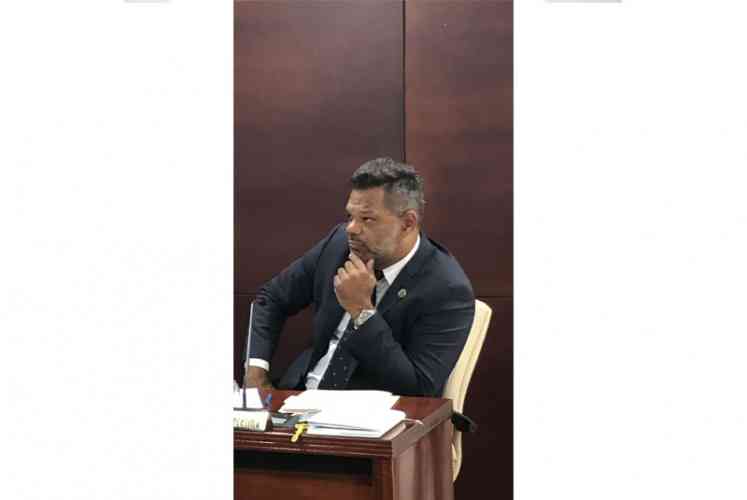 PHILIPSBURG–“I do not want the emptiness of this chair next to me to pass by unnoticed this morning. As we know, this chair is being occupied by Member of Parliament Theodore Heyliger,” said MP Dr. Luc Mercelina of his party leader who was detained more than eight days ago in an ongoing criminal investigation.

The impassioned MP said at the start of a Parliament sitting on Monday: “I have to believe, and I repeat, I have to believe, because I have no choice that a young country as St. Maarten is being supported and carried by an unbiased, independent and unconditional judicial system.”

“I am realizing that the leader of the United Democrats is going through some tough challenges, especially realizing that he is struggling a battle with some political, patriotic and nationalistic dimensions not on the soil of his home country,” the MP pointed out.

Heyliger was removed from the Philipsburg Police Station holding cells on Friday and flown to Bonaire as the investigation continues in the codenamed “Larimar” investigation.

Mercelina wished Heyliger and his family “a lot of strength, patience, faith and endurance to go through these difficult times … you are in our prayers.”

The Anti-Corruption Task Force TBO on February 19 arrested Heyliger at his home in Guana Bay. They searched his home and confiscated a number of documents and data carriers.

As part of the Larimar investigation, Dutch consultant R.M. (64) was suspected of alleged bribery of former Minister of Public Housing, Spatial Planning, Environment and Infrastructure VROMI and now Heyliger between August 1 and September 9, 2011.