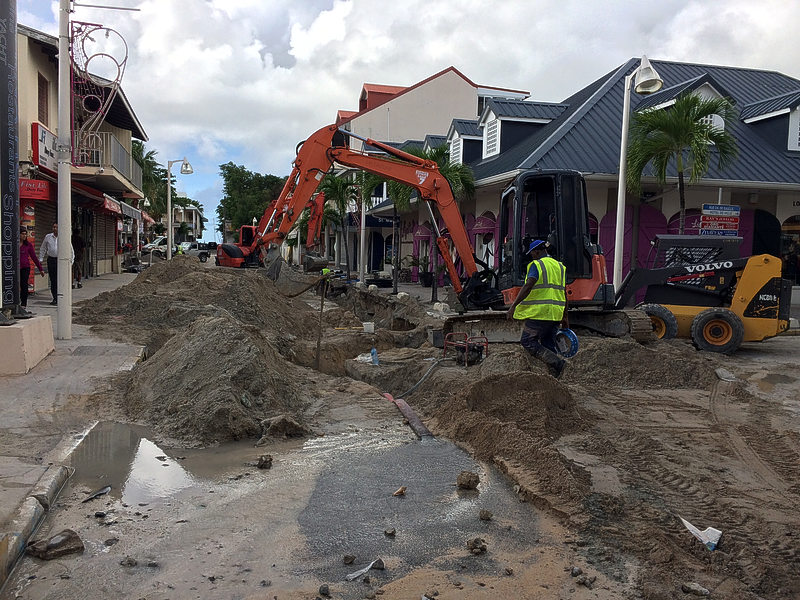 MARIGOT–Board members from the Marigot Merchant’s Association (ACM) said they were satisfied with the Collectivité decision Wednesday to create a compensation commission that will evaluate claims submitted by merchants who have incurred a loss of business in Marigot due to work currently being done by the water and drainage authority EEASM.

Merchants having claims approved can expect to be compensated during the first quarter of 2017. It was understood there would be some relief, moratoriums or delays on tax obligations as well.

Creation of the commission will be put to a vote in the Territorial Council on December 8 with a planned first meeting in December.

It is the first time a commission like this will be created in St. Martin although they exist in France for businesses impacted by infrastructure work, or by future work to be done.

The quick resolution defused a potentially tense situation when over 60 merchants gathered in Hotel de la Collectivité Wednesday morning to demand answers for the inconvenience and loss of business. Some shops have closed until the work is finished.

EEASM insists the work on Rue Kennedy and Rue de la Liberté will be finished by the end of November but admitted to encountering unforeseen obstacles underground.

“The Collectivité should have doubled its budget to have this work done in two months instead of four,” said Merchants Association President Yann Lecam before going into the meetings.

Initially the gathering rejected Vice-President Wendel Cocks’s suggestion to have a meeting with a delegation only from the Merchants Association, insisting they all wanted to be present. That changed later, however, when more technical details of the commission-to-be were discussed.

Working meetings have already been scheduled starting this month to prepare the legal framework of the commission in order to move quickly on a compensation procedure.

Joining Vice-President Cocks in the meeting with the merchant’s delegation were Chamber of Commerce President Jean Arnell, Chef de Cabinet for President Aline Hanson, Pierre Brangé, and other technical officials.

EEASM technicians gave the merchants an update on progress of the work, pointing out that old, cracked water pipes needed to be replaced urgently to stem the loss of drinking water.

Merchants Association board member Jean Canet expounded that the onus is now on the various merchants to prove they suffered a significant drop of business by producing their figures to the commission.

Chamber of Commerce President Arnell indicated the meeting on Wednesday was about the economic impact the work and road closures have had on retail businesses over the past three months.

“Business persons have been significantly impacted,” he said. “In France such commissions can evaluate the economic impact the work will have and compensate accordingly. The Chamber of Commerce proposed creating this commission and it was accepted by the Collectivité.”

He added there are different forms of economic impact, depending on whether access to the business has been prevented, or only lightly restricted.

“The availability of Vice-President Wendel Cocks and technical staff to listen to the grievances is commendable. They provided us with an update on the work and when it will be finished. They were very open to the commission and to study the requests of the business community.”

Arnell said the main challenge is getting in and out of Marigot by car. A proposal was raised at the meeting to turn Rue de Hollande into two-way traffic temporarily.

“We think it’s a feasible idea despite the parking difficulties but it will be up to the Collectivité to decide.”