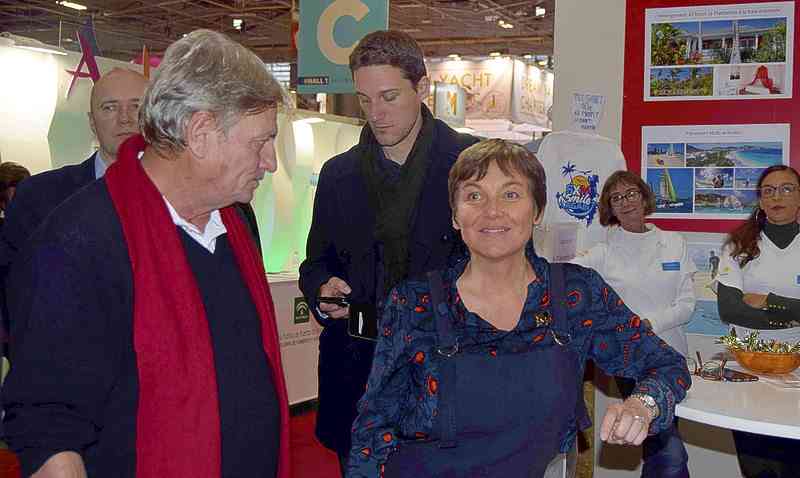 A view of St. Martin’s stand at the nautical show in Paris.

MARIGOT–Marine trades association Métimer’s recent attendance at the Nautic Paris Show turned out to be a great success, having carefully prepared the trip beforehand in partnership with the Collectivité, Chamber of Commerce and St. Martin Tourism Office.

Organiser of the show Fédération des Industries Nautiques (FIN) had made St. Martin a guest of honour, providing Métimer with the “SXM Smile Again” stand and assisting the board with soliciting donations for recovery of the French side’s marine infrastructure.

The opening day’s press conference was an opportunity for the President of FIN and Gülay to talk about the actual nautical situation regarding damaged boats and infrastructure in St. Martin. Journalists present were invited to visit the SXM Smile Again stand.

Gülay also met Minister of Transport Elizabeth Borne with whom he discussed the situation on the French side, and in particular the concern about boat wrecks that did not have insurance and were abandoned in the Lagoon. He also raised the subject of the difficulty a boat owner has to insure a French-flagged vessel if he wants to sail in the Caribbean. The Minister was anxious to know if State services were actually working on behalf of the marine community. Her Chef de Cabinet agreed to keep in touch with Métimer on these points.

Despite the setting up of a crowdfunding campaign by Ekosea, and sympathy visitors had for St. Martin’s suffering after the hurricanes, not a great deal of money was collected. However, the competition to win a vacation for two in St. Martin was a success, proving that St. Martin can still attract tourists. That was helped by bottles of rum offered by Madame Damoiseau.

Another success during the show was an auction of photographs depicting 30 sailors from the last Vendee Globe. The company Fountaine Pajot represented in St. Martin by Peter Cohen of Caribbean Multihulls and Métimer board members acquired several of the superb black and white works of art. Métimer obtained 80 per cent of the proceeds from the auction and announced the creation of a club in St. Martin to relaunch nautical activities in 2018.

Gülay was also interviewed by national journalist Philippe Baroux from Sud-Ouest. Another interview was with Julie Durand from Ouest France. Several articles were published about St. Martin.

Discussions were also held with Minister of Sports Laura Flessel and Minister of Overseas Territories Annick Giradin, both present for the show. In an hour-long meeting with the Overseas Minister, Gülay explained to her the problems with insurance, how to break up and process boat wrecks once they have been removed from the water, and other issues. The Minister was very attentive to suggestions on reconstructing the nautical industry in St. Martin, and was concerned that boat wrecks are removed quickly to prevent more pollution and to unblock marinas.

On the last day a winner of the competition for a vacation for two in St. Martin was announced.