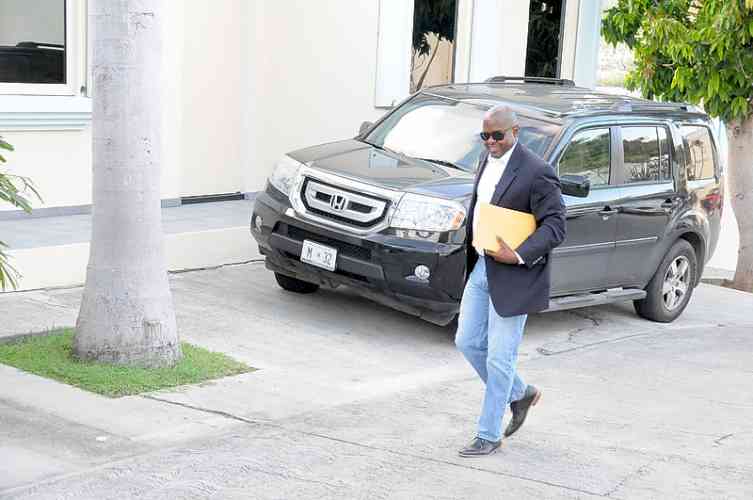 PHILIPSBURG–The final report of the Franklin Meyers Cabinet was delivered by formateur Member of Parliament (MP) Franklin Meyers to the Governor’s Cabinet in Philipsburg on Friday afternoon.

Governor Eugene Holliday requested that Meyers form an interim government supported by as broad a majority in Parliament as possible to foster political stability. He requested that Meyers present him the final report of the formation process on December 4, but this was done on Friday, December 8.
The supporting parties have agreed on the division of the portfolios and have selected persons for screening as candidates for the posts of Prime Minister, Ministers, Minister Plenipotentiary and acting Minister Plenipotentiary. Meyers has submitted the information of selected individuals and the screening of candidates is still ongoing.
Meyers is tipped to become the country’s fourth Prime Minister in seven years. Former MP Leona Marlin-Romeo (United People’s (UP) party) is also undergoing the required security and integrity screening for Minister candidates. She is expected to take up the post of Minister of Justice. She served an abbreviated term in Parliament from 2014 to 2016 due to snap elections.
MP and former Tourism, Economic Affairs, Transport and Telecommunication Minister Claret Connor (UP) is tipped to take up the post of Minister of this essential Ministry again.
Long-time civil servant and current Ministry of Education, Culture, Youth and Sport (ECYS) Secretary-General Jorien Wuite (Democratic Party (DP)) is expected to be ECYS Minister. She was a DP candidate in the 2016 election, earning 52 votes.
Current Public Health, Social Development and Labour Minister Emil Lee (DP) is to retain his portfolio when the new interim Council of Ministers is sworn in by Governor Eugene Holiday following all required screenings.
The name of former General Pension Fund APS Financial Controller George Willems was removed as candidate for the tough post of Finance Minister. Michael Ferrier is being mentioned as the replacement candidate.
Newcomer to the political scene Miklos Chomain Giterson, currently a civil servant in the Ministry of Public Housing, Spatial Planning, Environment and Infrastructure VROMI, is the Minister candidate for the Ministry in which he now works.
Expected to head to the Netherlands as the country’s Minister Plenipotentiary is former MP and Public Health Minister Cornelius “Connie” de Weever (UP).
Current Deputy Minister Plenipotentiary Hasani Ellis (DP) is to retain his post in The Hague.
There is no official word yet on when candidates will be sworn in.