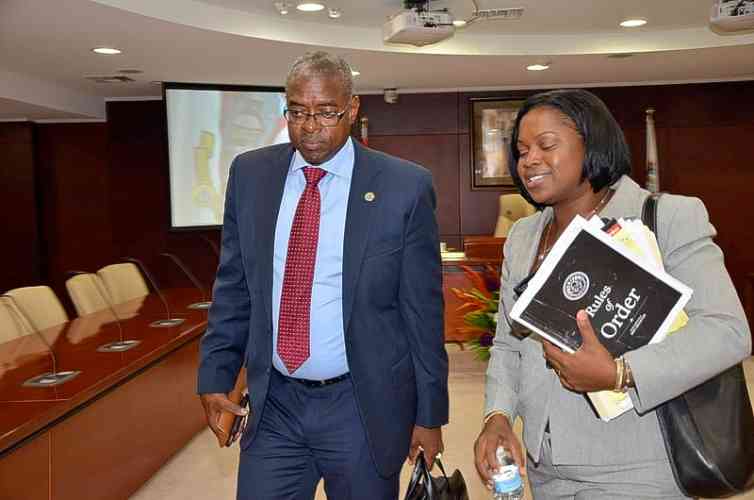 Meyers is the deputy leader of United People’s (UP) party and served as the country’s first Tourism and Economic Affairs Minister directly following the attainment country-within-the-Dutch-Kingdom status on October 10, 2010. He was his party’s second-highest vote-getter with 524 votes.
Former MP Leona Marlin-Romeo (UP) is also undergoing the required security and integrity screening for Minister candidates. She is expected to take up the post of Minister of Justice. She served an abbreviated term in Parliament from 2014 to 2016 due to snap elections. She ran in the 2016 elections, but did not acquire sufficient votes to retain her parliamentary seat.
MP and former Tourism, Economic Affairs, Transport and Telecommunication Minister Claret Connor (UP) is tipped to take up the post of Minister of this essential ministry again.
Long-time civil servant and current Ministry of Education, Culture, Youth and Sport (ECYS) Jorien Wuite (DP) is expected to be ECYS Minister. She was a candidate with the Democratic Party (DP) in 2016, earning 52 votes.
Current Public Health, Social Development and Labour Minister Emil Lee (DP) is to retain his portfolio when the new interim Council of Ministers is sworn-in by Governor Eugene Holiday following all required screenings.
Former General Pension Fund APS Financial Controller George Willems is the candidate for the tough post of Finance Minister. Willems was not a candidate in the 2016 parliamentary election or any prior poll.
Joining Willems as a newcomer to the political scene is Miklos Chomain Giterson, currently a civil servant in the Ministry of Public Housing, Spatial Planning, Environment and Infrastructure VROMI. He is the Minister candidate for the ministry in which he now works.
Expected to head to the Netherlands as the country’s Minister Plenipotentiary is former MP and Public Health Minister Cornelius “Connie” de Weever (UP).
Current Deputy Minister Plenipotentiary Hasani Ellis (DP) is to retain his post in The Hague.
With two current MPs – Meyers and Connor – tipped to become Ministers, their seats, once vacant, will go to the next highest vote-getters of the UP slate who are not set to become Ministers, as is the case with Marlin-Romeo. The presumptive new legislators are former MPs Jules James who received 201 votes in 2016 and Dr. Lloyd Richardson (162 votes).
The incoming Meyers Cabinet, whenever it takes office, will only have a contracted term in office due to the snap election set for February 26. If the new cabinet does not halt the election, it will be the country’s second snap election in some 17 months.
The term of the current Parliament should have ended in 2020. The calling of early elections means its term is set to end on April 2, 2018. On that Easter Monday, the new Parliament will take its seat.
The new cabinet stems from the current National Alliance-led Council of Ministers losing its majority in Parliament in late October. That cabinet, with the exception of Lee, resigned following a vote of no-confidence on November 2 by the new parliamentary majority of eight, comprising UP (five seats), DP (two seats) and MP Chanel Brownbill (one seat). Lee had tendered his resignation prior to the casting of the ballot.
The breaking point for the current cabinet headed by Prime Minister William Marlin was the prolonged delay in accepting conditions set by the Dutch Government for the dispersing of recovery assistance following the widespread devastation wrought by monster Hurricane Irma on September 6.