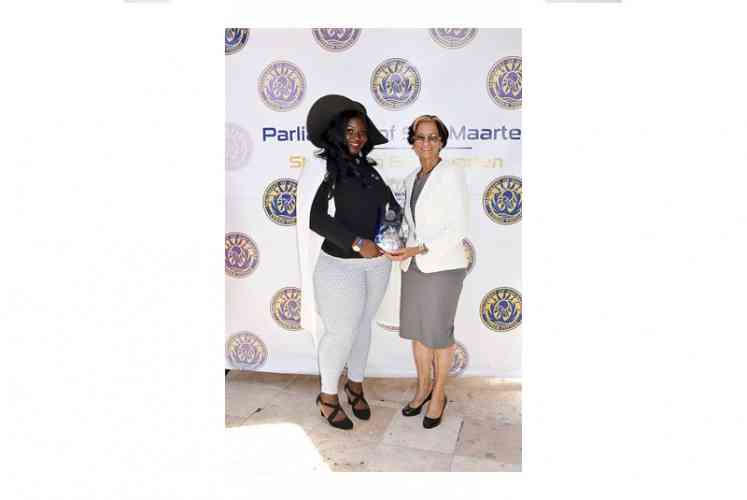 PHILIPSBURG–Mhakeda Shillingford was presented with the President of Parliament Award for 2019 during a reception at Sheer Restaurant following the opening of the new parliamentary year on Tuesday.

The award is presented annually to a youth who displayed exemplary behaviour, leadership skills as well as contribution to the community.

Shillingford began contributing to St. Maarten at the age of 10. She volunteered in tutoring students ages five to 16 years for their academic growth. She also volunteered at summer camps every summer as a youth leader to motivate and develop students.

Every Christmas she would collaborate with youth groups to have a Christmas party for foster home children to give them a warm-hearted Christmas, filled with fun, food and gifts. She has always been a strong advocate for her island, it was stated in a press release issued on Wednesday.

She has been part of the St. Maarten Youth Parliament, Dutch Kingdom Youth Parliament and the St. Maarten Youth Council Association. She was also part of Y2x which is a podcast motivating teens on both sides of the island. She was in Beautiful Me magazine, which was intended to cultivate self-love in young people. She is the founder of an organization called Patrol to Eradicate Pedophilia and Child Molestation.

Now that she has ventured on to Texas in the USA to further her studies, she still represents her island. As President of Texas Junior Colleges Student Government Association, she advocates for the rights of students at colleges in Texas.