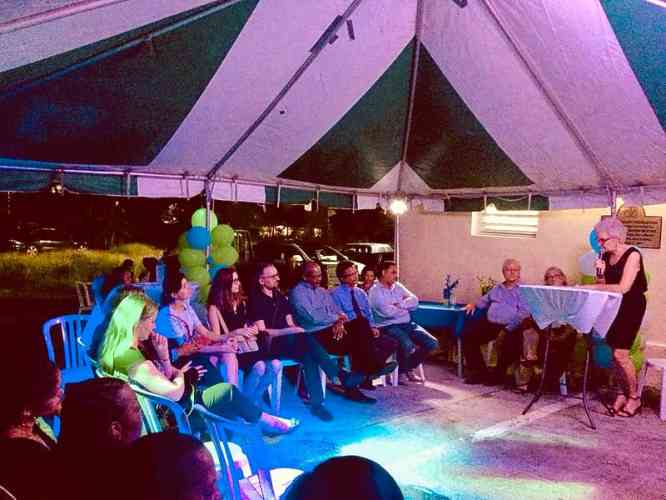 ~ Says his statements can fuel stigma ~

CAY HILL–The Mental Health Foundation (MHF) on Tuesday ripped into statements made by Dean of the St. Maarten Bar Association attorney-at-law Geert Hatzmann saying he was “out of place,” to question “the treatment methods and medical decisions” made by the multi-disciplinary team of experienced health care professionals when it comes to mental health care in the country.

MHF was at the time responding to statements made by the attorney, who last week sounded the alarm over the fact that St. Maarten does not have a clinic for the treatment of persons with psychiatric disorders who have committed crimes.

MHF also said that some of the attorney’s statements would only contribute to stigma and would not help its cause. “Putting a label of ‘unstable, violent and permanence’ on people, who had to have courage to deal with their issues is possibly the most destructive thing you can do as a society as it increases the stigma.

“This makes it harder for people to look for help because they are afraid of social judgment. This is a slippery slope that we should try to avoid by all means, and that is why we recommend a person-centred approach where resilience and human strength as starting point,” MHF said in a press release.

In his statements, Hatzmann had said many psychologically disturbed persons are extremely dangerous and that there are dozens of these potentially life-threatening persons walking around in St. Maarten. He said after serving a sentence, prisoners with a psychiatric background return to society without any noteworthy treatment. “These are the arguments which form the base for his plea for a psychiatric detention facility on St. Maarten,” MHF said.

The foundation said while it recognises the need for rehabilitation after detention, applauds this initiative and is very willing to work together to improve psychiatric care in St. Maarten, such a collaboration would be more efficient if feedback would have been requested from the institutions responsible for psychiatric care in St. Maarten, which MHF said was not the case.

“For this reason, the Mental Health Foundation is reacting to [Hatzmann’s statements – Ed.] to rectify certain arguments and provide the nuance that a difficult topic of mental health requires,” MHF said in its release.

MHF said as a lawyer and Dean of the Bar Association with 12 years’ experience, Hatzmann should refer to the existing laws in St. Maarten. MHF said it provides quality care in accordance with the relevant indicators and protocols directed and supported by the laws, as advised by medical and legal advisors and government.

“Involuntary care at MHF is only possible in accordance with the laws, and with the declaration of the Minister of Justice. Hatzmann, MHF said, spoke to the psychiatrist about his specific case. However, treatment decisions are made by a multi-disciplinary team of professionals at the foundation as well as in collaboration with Social Affairs, SJIB, Police and OM [Prosecutors Office]. Furthermore, families are involved in patient care as much as possible.

MHF currently has 1,000 patients in its care, of whom the vast majority have jobs and contribute to society. “Claiming that there are ‘dozens of severely mentally ill people out there walking around freely and are potentially life-threatening’’ is not supported by any tangible figures and will only increase the stigma, which does not help our cause,” MHF said.

The foundation alluded to World Health Organisation (WHO), which says one in every four people will be affected by a mental or neurological disorder (either big or small) at some point in their lives.

MHF said it has from the onset of its existence in 2006, been working closely with the Prosecutor’s Office OM, police, prison, SJIB (probation), the Ministries of Health, Labour and Social Affairs, and Justice, and Turning Point Foundation, as well as many others.

“A few years ago, there was a prosecutor who suggested St. Maarten needed a forensic psychiatrist and she could organise it. Her well-intended intentions never materialised because the reality is that there are not dozens of dangerous psychiatric patients on St. Maarten.

“A forensic psychiatrist costs around half a million guilders per year for approximately 10 persons, of whom most problems have been solved locally or are still in the process of being solved. It is a complicated process that can only be solved if all involved parties – health, legal, government, etc. – work together,” MHF said.

“We will not contend that on St. Maarten the psychiatric care is perfect, but we are getting there. Regardless, much has been accomplished in a short period of 12 years, prior to not having anything on St. Maarten.

“The best approach to improve psychiatric care would be to look at the bigger picture here and together, find out where we can make the most constructive and efficient improvements, rather than to build cases around incidents that happen, as is shown by the example that Mr Hatzmann refers to in his article: where a psychiatric prisoner on leave recently killed a woman in the Netherlands. A country with all so-called facilities available to prevent incidents and it still happened.”

MHF suggested bringing parties together with the objective of solving problems. “Providing a one-sided story without requesting any feedback from us, based on one specific case and personal experiences, has an adverse effect on problem-solving. MHF is there to solve complex psychiatric problems, and we could use professional assistance without downgrading of the work being done.”

The foundation invited the members of the Bar Association to visit the MHF facility to get a better understanding of the situation and to meet its team and understand “the enormous challenges they are facing on a daily basis without complaining, and together we can work on a structural solution to this problem.”