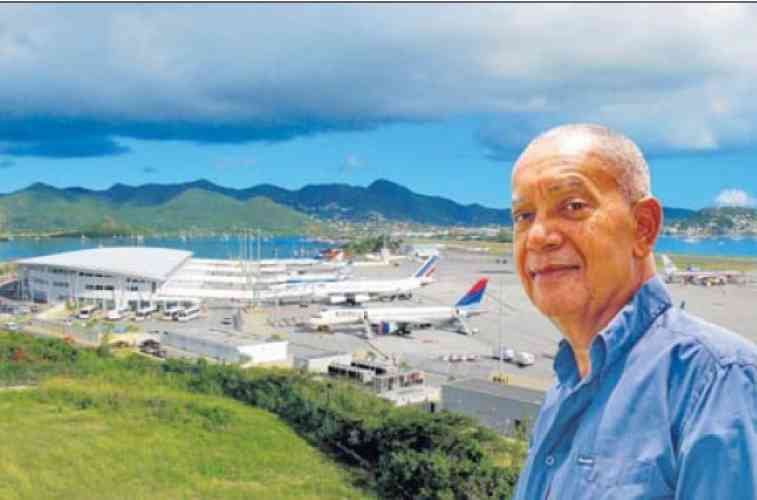 AIRPORT–Aviation veteran and long-time member of the Princess Juliana International Airport (PJIA) supervisory board Michel Hodge was voted in as the new board chairman on April 29.

Hodge fills the spot made vacant by the resignation of now former board head Alex Dijkhoffz. The latter resigned citing personal reasons. He informed Transportation Minister Stuart Johnson of his resignation as a board member as well as chairman on April 16.

Hodge continues his supervisory roles at the helm of the country’s airport together with fellow board members Jimmy Tremmer, Myrna York and Cleveland Beresford.

There is one spot vacant on the board with Dijkhoffz’s complete departure. Someone with a strong financial background will be sought for the vacant post. The supervisory board has been missing such an individual since the departure of then board member and chairman Gary Matser a year ago.

As per the St. Maarten government’s agreement with the Netherlands, The Hague will provide a candidate for a new member of the airport supervisory board. This candidate will require the Council of Ministers’ approval, and has to be screened and appointed in accordance with the applicable rules and procedures. Remuneration will be the same as for other members of the supervisory board. The appointment process should have been initiated before April 24.

One of the requirements set by the Dutch Government for the release of the US $50 million grant the local government will then pass on to the airport as a loan is a corporate governance review or assessment. The findings of such a review must be implemented for the grant to become available.

The security screening of all members of the airport’s supervisory and management boards should start soon and will be conducted by the National Security Service VDSM. The two boards should have formally requested before April 24 that Prime Minister/General Affairs Minister Leona Romeo-Marlin initiate the VDSM screening process.

The agreements between the St. Maarten and Dutch governments so far are that an interim Chief Financial Officer (CFO) will be appointed at the airport for two years via the Royal Schiphol Group. Simultaneously, the airport will seek and hire a permanent CFO in accordance with the established procedures under the Articles of Incorporation of its holding and operating companies.